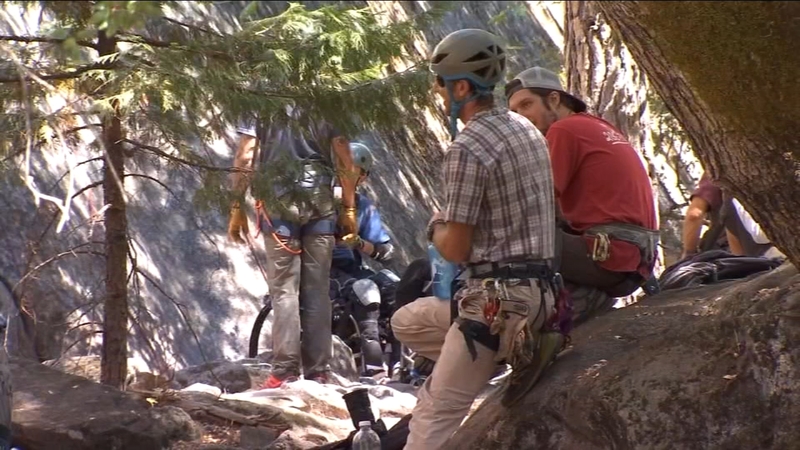 YOSEMITE NATIONAL PARK (KFSN) -- It's one of the hardest things Christopher Farris says he has ever done.

He and several other disabled veterans are overcoming their challenges and climbing the Yosemite granite walls to commemorate the lives of those lost on September 11.

"When you get up there, you're exhausted, and you sat I made it. I made it," said veteran Christopher Farris.

The program is led by Paradox Sports, an adaptive climbing nonprofit out of Colorado.

So lucky to be able to be here for this. 12 disabled veterans scaled the granite walls of #Yosemite , honoring the lives of those lost on #Sept11th . This is the 6th time the event has been at the National Park. Hear one veteran’s story at 6 on @ABC30 pic.twitter.com/qayUiUqV3e

They have 12 veterans scaling the mountainside this year.

"It's definitely a powerful weekend In the valley, and I hope the veterans how much we respect that as civilians," said Paradox Sports Dom Pascariello.

This is a first for Faris.

He was in the Marine Corp but later became disabled after an accident. Years later, He's battled years of depression and diabetes.

With every step, he is leaving that behind.

This is the sixth year the event has been held in the national park.

Dating back to the Buffalo Soldiers, Yosemite has a history of patriotism, so rangers say it's rewarding to see veterans taking on their biggest obstacles inside the park.

"It's our way as honoring these service men and women, it's extremely important to Yosemite and all men and women to honor those who fought for our country," said Yosemite National Park Ranger Scott Gediman.

Though their disabilities are different, the determination of these men and women is equally strong.

Farris says it has been 13 surgeries, even more, years of pain.

But it only took a leap of faith to get him up the wall, keeping the lives of those lost years ago in mind.