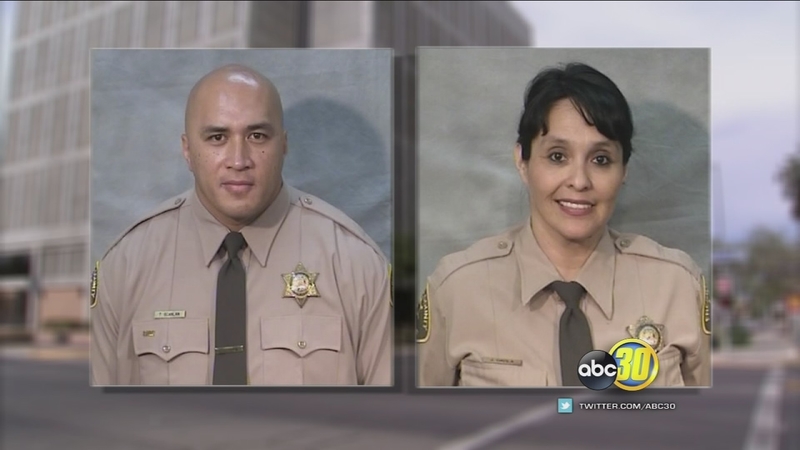 FRESNO, Calif. (KFSN) -- The Fresno County Sheriff's Department has confirmed that two officers were injured in an active shooter situation at the Fresno County jail in Downtown Fresno.

Authorities said Thong Vang, 37, of Fresno shot Correctional Officers Juanita Davila and Toamalama Scanlan around 8:30 a.m. Saturday. They said Vang entered the jail and made his way to the front of the line and stated he wanted to see someone at the jail.

Fresno County Sheriff Margaret Mims said Vang acted erratically when confronted by staff and did not cooperate with officers. Mims said there were about 15 people in the public area of the jail when Davila confronted Vang before he pulled out a gun and started shooting at officers, striking Davila. Scanlan responded after calls for help were made and he was hit.

Vang then exchanged fire with a jail lieutenant but no one was hit, authorities said, and Vang retreated to a hallway before surrendering to officers and was arrested.

"When he was confronted by sheriff's deputies, he showed his weapon, dropped it outside of the door, and said that he wanted to be arrested," Mims explained. "He was held at gunpoint while other law enforcement personnel pulled the two victims out of the lobby to awaiting ambulances."

Scanlan and Davila were rushed to Community Regional Medical Center after both were shot in the head and neck area. Authorities said Davila is in critical but stable condition, while Scanlan is in critical condition and undergoing surgery.

Christy Rodriguez said she was in the woman's bathroom during the ordeal, which only lasted a few minutes. She saw both of the injured officers in the lobby and can't get the scene out of her mind.

"I hope they make it because you don't go to work planning on that," she said. "You go to work, you prepare for your job but you don't expect that inside the jail."

Authorities said Vang served a 16-year prison sentence after being convicted of raping three minors ranging in age from 12 to 14. Vang was released in 2014 and has no criminal history since then.

"What changed his mind to decide to act out and confront our correctional officers this morning, we don't know yet," Mims said. "But that's certainly a question we'll find out."

Tulare Avenue to M Street is closed and the Fresno County Jail remains on lockdown.