Alaska gets $5 million for road repairs

The Federal Highway Commission released the funds Saturday after it said it received a request from Alaska Gov. Bill Walker and the state transportation commissioner, Marc Luiken.

The Glenn Highway received damage in several areas north of Anchorage. The Seward Highway south of Anchorage has seen several rock slides from the quake and aftershocks. An on-ramp to a major Anchorage roadway also was damaged.

The $5 million is essentially seen as a down-payment to help fund short-term repairs while assessments for long-term repairs are made.

Anchorage Mayor Ethan Berkowitz says the city is on the road to returning to normal a day after a magnitude 7.0 earthquake struck.

Alaska earthquake: Videos from during and after the 7.0 quake (1 of 7)

Video from Alaska shows the aftermath of an earthquake that struck on Friday, Nov. 30, 2018.

There were no deaths reported from the quake and minimal damage to buildings. However, the one highway leading north out of Anchorage received some major damage in spots.

At one time, power was out to nearly 50,000 residents because of the quake. But Anchorage Municipal Manager Bill Falsey said at a news conference Saturday that power has been restored to all but about a dozen residents.

The gas company is investigating about 650 reports of leaks, a number that has risen Saturday as people return to office buildings to check on damage.

Police said there was no looting in the aftermath of the quake. And fire officials warned people to be careful as high winds expected later Saturday could send unsecured debris flying.
Report a correction or typo
Related topics:
alaskaearthquakedisaster
Copyright © 2021 by The Associated Press. All Rights Reserved.
EARTHQUAKE

California Dreaming: The Future of the Golden State 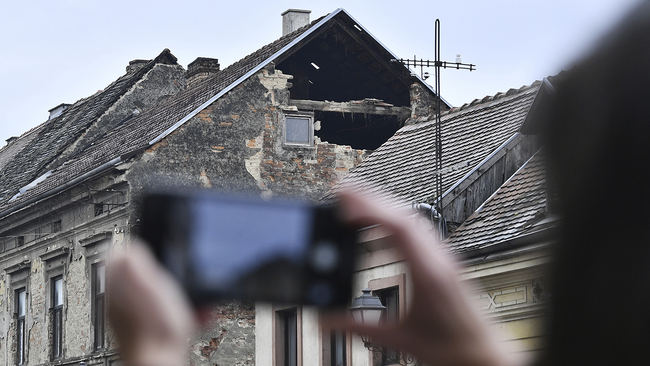