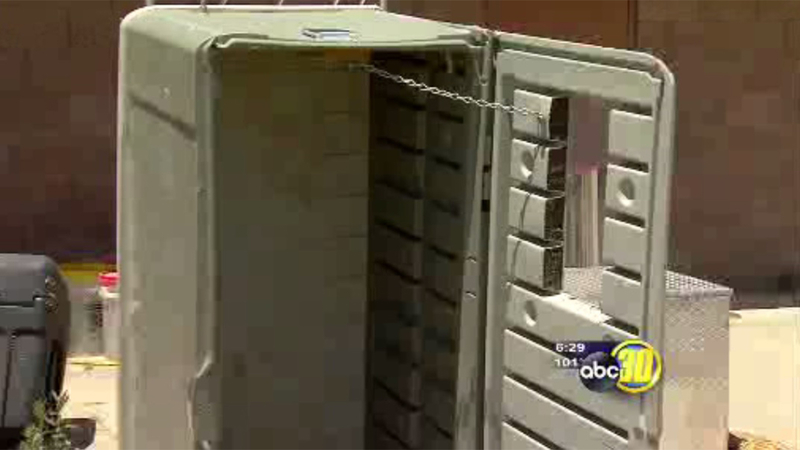 COALINGA, Calif. (KFSN) -- A carbon dioxide gas chamber was being used to kill cats and dogs at the Coalinga Animal Shelter.

It was the last known one in California, and it was decommissioned Friday.

It's heartbreaking to know that a gas chamber was the final resting place for many cats and dogs in the city of Coalinga, but officials closed the lid for good.

It was believed to be the last of its kind in the state and an inhumane way to kill animals.

"So, it's a tremendous step forward for animal welfare today," said Brandy Kuentzel with the San Francisco SPCA.

She says cats and dogs living at the Coalinga Animal Shelter generally don't have a good chance of surviving, but that's different in San Francisco where she says 93 percent of animals who go into the shelter system make it out alive.

That's why the San Francisco SPCA took dozens of Coalinga cats and dogs there Friday morning, the organization first found out about the city's gas chamber through a tip late last year.

"We hear from shelter staff that on average it took about 15 minutes for the animals to die this way," Kuentzel said.

For removing the chamber, the Humane Society of the United States gave Coalinga Police, which runs the shelter, a $5,000 check.

The SPCA has also donated thousands of dollars in equipment and training, with the goal of elevating the level of humane care at the shelter.

But Kuentzel says there's more work to be done in several other states where that method is still legal.

"And California is one of the most humane, if not the most humane state in the nation, and once we do something, other states pay attention," Kuentzel explained.