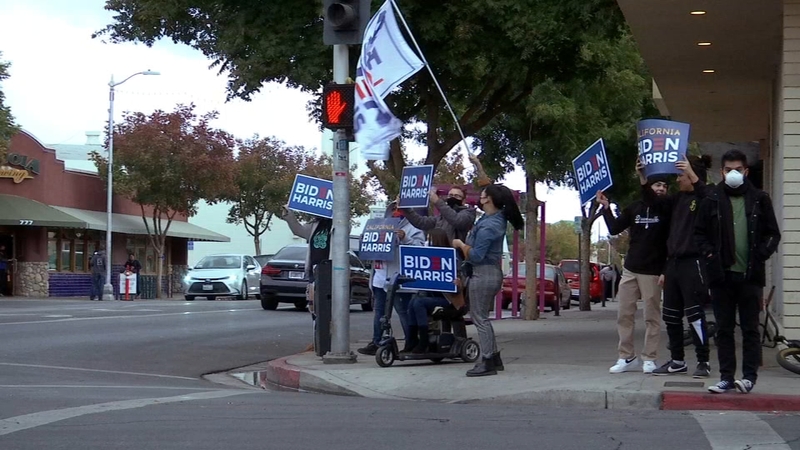 FRESNO, Calif. (KFSN) -- The sound of honking horns could be heard in Fresno's Tower District all morning long through late afternoon.

The noise prompted by a small group on Olive and Broadway, sharing their excitement over Vice President Joe Biden becoming President-elect Joe Biden.

As they celebrated, a man holding an American flag with Donald Trump's face reading "Making America Great Again" stood across the street.

Both demonstrations remained peaceful, with some preaching unity.

But some say announcing Biden's victory over President Trump is premature.

Fred Vanderhoof, chairman of the Fresno County Republican Party, says the winner should only be declared once all votes are in.
"Some of these numbers could change and some of the lawsuits could change the numbers, so we still have a lot of time left," he said.

The Trump campaign has already filed lawsuits in five different states where the votes were close.

David Rowell with the Fresno County Democratic Committee says votes still need to be counted in some states, but based on amount of ballots left to count, he believes Biden is the clear victor.

"Vice President Biden will bring a lot of stability and calm to a lot of crazy troubled waters we've all been living for the last four years," he said.

Many elected officials have publicly expressed their congratulations to Joe Biden and Kamala Harris.