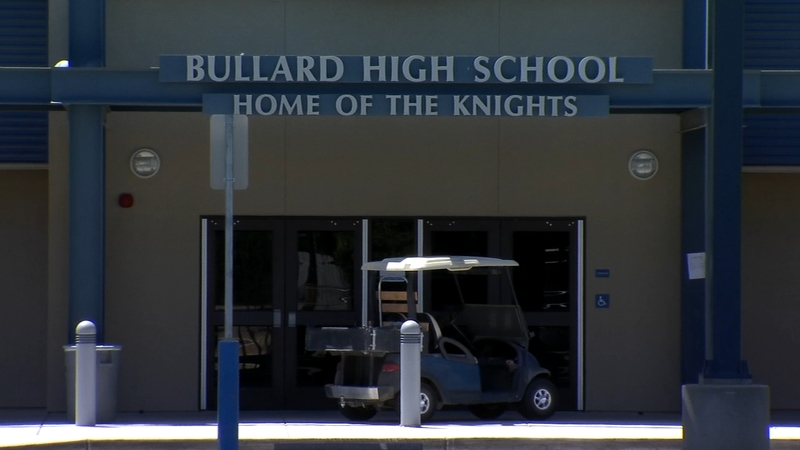 FRESNO, Calif. (KFSN) -- A controversial picture taken at a northwest Fresno high school and posted on social media could result in disciplinary action for those involved.

It shows a student with something on his head that resembles the hoods worn by members of a white supremacist group. It was taken in the Bullard High School weight room, according to district leaders.

Members of the Black Student Union at Bullard say they are sad and frustrated.

"It's just very disappointing knowing that the people you sit next to in class or sit behind you and they are potentially being racist, and you wouldn't even know it because they are people you walk past and see every single day," says Evonne Henderson.

Their goal is to hold the school district accountable.

A controversial picture taken at a northwest Fresno high school and posted on social media could result in disciplinary action for those involved.

On Friday afternoon, students scheduled a walk-out in silence not only at Bullard high School but also a number of other schools throughout the district.

Hundreds of Edison high school students took to the streets to protest as well, walking nearly two miles to the district's boardroom.

Many parents are also outraged. On Friday morning, several gathered to meet with administrators about the next steps.

"Why do they let students be racist? And it could continue to happen, especially to the kids of this community," says Emerald Mitchell. "It's a picture now but it can be a riot later."

This is not the first time the district has faced allegations of racism. In 2019, the ACLU filed a discrimination complaint against Fresno Unified, claiming it failed to protect Bullard students after a white classmate posted a video in blackface.

Friday afternoon, Superintendent Bob Nelson said the students deserve better. He pledged to pursue disciplinary action against those involved in the photo, along with cultural sensitivity training and expanding the district's race and social justice advisory board.

"For anybody within the sound in my voice and wants to shrug that off as a joke or kids being kids, I need to be clear: cultural destructiveness, racism and hate are never a joke," he said.

District officials say they are thoroughly investigating the photo, and again, they will be pursuing disciplinary action
.
Local organizations that serve the African American community say they will be offering resources to students and families in the wake of this incident.