The countdown to September 14 is on, with just one week until Election Day.
KFSN
By Elisa Navarro and Jessica Harrington 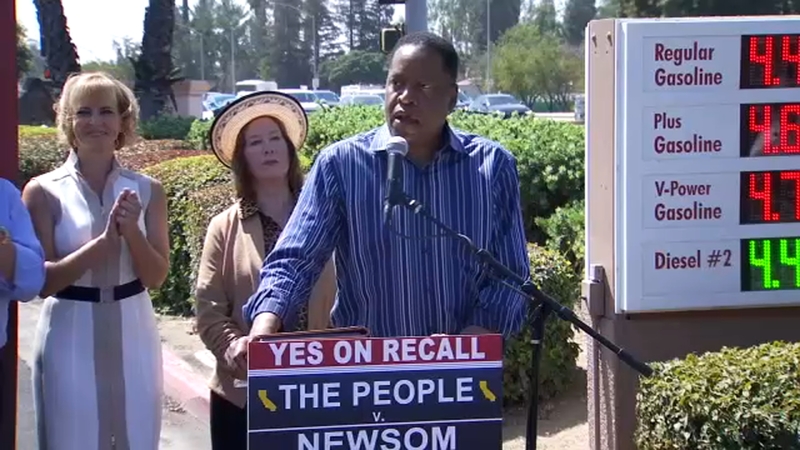 CLOVIS, Calif. (KFSN) -- California's Recall Election is one week away.

Republican challenger Larry Elder made several stops across California Tuesday, including in Clovis.

It is the conservative talk radio host's second visit to Clovis in a little more than two weeks.

Elder spoke critically of the state's gas tax, the high-speed rail, calling it the "train to nowhere," and Governor Gavin Newsom's handling of the pandemic.

The Republican opposes Newsom's policies of mandated vaccines and masks in the workplace and promised to make changes immediately if he's elected.

"I'm going to repeal those before I have my first cup of coffee," Elder said.

The event was held at the Shell gas station at Willow and Nees Avenues with hundreds of supporters in attendance.

"Because Gavin Newsom has harmed working-class people, business people, employers and inconvenience customers all over California, not just in Los Angeles, not just in Sacramento, but here in Clovis," Elder said.

Meanwhile, Gov. Gavin Newsom was campaigning in San Francisco encouraging people to vote "no" on the recall.

Adding, if they don't, Larry Elder will likely be the next governor.

"The power he has day one, with an executive order to eliminate those protections, is profound and I hope the community wakes up to that simple choice," Gov. Newsom said.

Elder is leading the latest polls for challengers in the election.

Thomas Holyoke, a professor of political science at Fresno State, believes Elder's high profile amongst conservatives republicans in the state has helped.

However, he said Elder's stance on certain issues may actually be working against him.

"A lot of voters are just not at all attracted to Larry Elder and other republican politicians like Faulconer and Cox are just not able to get any traction of the voters at all, partially because they're being blocked out by Elder. So, a lot of voters are looking at Elder, not particularly liking what they see and therefore are willing to give some support to Newsom," said Holyoke.

Professor Holyoke said initially there were concerns among Democrats that there would be low democratic voter turnout for the election, but he says early numbers are indicating that's not the case.

Mail-in ballots are already coming in across the state.

In Fresno County, the registrar of voters is anticipating a total turnout of around 50 percent.