Cal/OSHA looked into only 8% of safety complaints in Central CA: ABC30 investigation 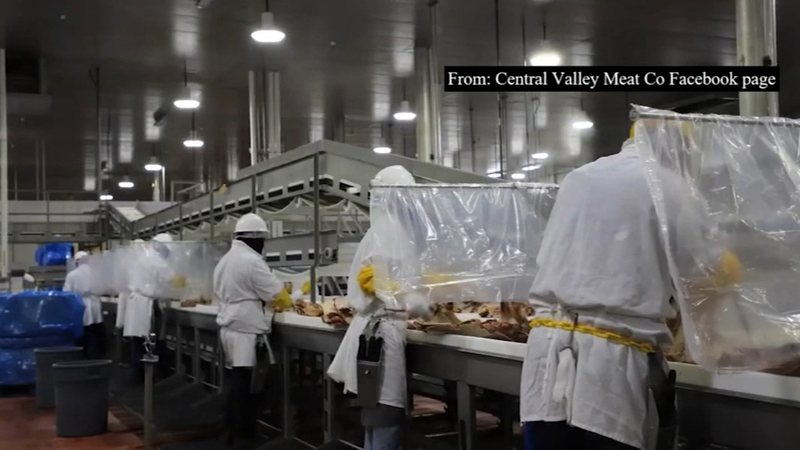 FRESNO, Calif. (KFSN) -- In close quarters and without proper protective equipment, employees at Hanford's Central Valley Meat claimed in a lawsuit their employer put them at risk every day in the first months of the COVID pandemic.

The lawsuit was dropped this month.

The company hasn't responded to Action News requests to comment for this story, but they did tell a trade publication after the lawsuit was filed that they "continually met or exceeded the CDC COVID-19 recommendations in our facility."

Four complaints came in to Cal/OSHA before inspectors visited the business in December and cited it for a long list of COVID-19-related safety violations.

"I think the general public needs to be concerned that if they file a complaint and it's very hard to get someone to take a look at it," says Sum.

Before COVID-19, the agency usually checked out a workplace in person after 20-25% of complaints.

But it's short-staffed. As many as one in five Cal/OSHA field inspector positions are sitting vacant.

State senator Anna Caballero said it's concerning she found out from us.

"Cal/OSHA is our number one entity at the state that does the inspections and that responds to complaints. And if they didn't have enough resources, it would've been good for us to know," she says.

The agency's leadership told Action News the number of complaints and reported deaths went up significantly across the state during the pandemic.

And they acknowledge that protecting the health of inspectors was a challenge, at least in the early stages.

Employers don't face any fines for a letter inquiry, only after a failed inspection.

In some cases, like at food establishments and hazardous materials businesses, inspections fall on county health departments, but a lot of them also didn't focus on inspections.

"During the pandemic, with the staffing we had in an environmental health role as opposed to the COVID response, we were able to start off with an educational campaign," says Fresno County Environmental Health Director Steve Rhodes.

Cal/OSHA says it conducted more than 400 COVID-19 related inspections in the Central Valley, but most were prompted by an injury, serious illness, or death instead of a complaint.

So the agency got five complaints about Daniel C Salas Harvesting and Dalena Farms in Kettleman City before a death prompted an inspection and a citation.

Five complaints came in about Corcoran State Prison before an illness prompted an inspection and a citation.

10 complaints about Fresno's Amazon Fulfillment Center led to one inspection, which did not result in a citation.

And there have been several complaints at healthcare and assisted living facilities - including seven about the Family Healthcare Network in Tulare County and four about Belmar Villa in Fresno.

None of those 11 complaints led to an inspection, so no citations.

Five complaints at Fresno County's Criminal Courthouse resulted in one inspection and no citation.

Complaints at several other Fresno County offices never led to inspections, but Cal/OSHA did cite the Fresno County sheriff's office for late notification that an employee had been hospitalized.

And since the board of supervisors ended the county's state of emergency, some county employees are heading back to the workplace full-time.

While the county had some hiccups in the pandemic's early stages, Fresno County Employee union leader Riley Talford says leaders were very responsive to safety issues.

But he always felt like the backup plan was calling for a Cal/OSHA inspection and now he's not so sure.

"That's very concerning. If there are workplace issues, concerns that we feel strongly enough for Cal/OSHA to come out and investigate and they're hesitant or reluctant, we feel there could be abuses by the employer," says Talford.

The Fresno County Sheriff's Office acknowledged their late notification, but told us they got the fine reduced.

None of the other establishments named in this report as receiving complaints provided a comment.

Cal/OSHA's director tells us COVID-19 related complaints and illness reports have declined in recent months and they're working hard to fill inspector vacancies.

So workplace safety enforcement, like the community as a whole, is starting to return to normal.