California recall election: How many ballots have been returned in your county?

Find out how many recall ballots have been returned in your county with our interactive map.
KABC
By Grace Manthey 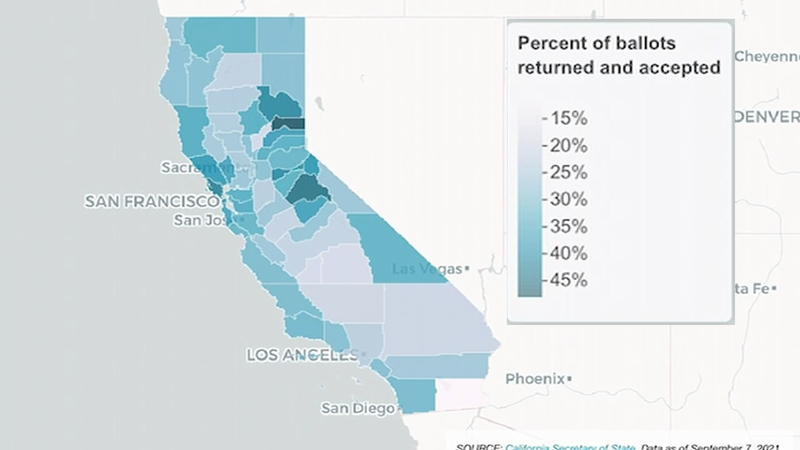 How many recall ballots have been returned in your county?

Every registered California voter has received a ballot in their mailbox for the upcoming recall election that could help decide if Governor Gavin Newsom will keep his job.

As of September 13 more than 8 million ballots, about 38%, had been returned and accepted by mail. An additional 324,000 have been cast in-person for a total of nearly 40% returned.

The early voter turnout data is revealing some interesting potential storylines for the upcoming election.

County with the highest turnout (so far): Sierra County

While Sierra county has the second lowest number of ballots issued at just over 2,000, data through September 13 shows the county had the highest percentage of returned and accepted ballots by mail or in-person, about 62%, according to data from the California Secretary of State. The county had 2 ballots returned in-person according to the September 13 data.

Data through September 9 had Marin County with the highest percentage of returned and accepted ballots. The most recent update shows Sierra, Amador, Tuolumne and Plumas Counties surpassed Marin, which now has a return rate of about 55%.

County with the lowest turnout (so far): Imperial County

Los Angeles may be the largest county in the state but it's on the lower end when it comes to return rate at just about 35%. Riverside and San Bernardino Counties sit close to 37% and 29% respectively. The Southern California county with the highest return rates is Orange County at around 45%.

In the San Francisco Bay Area, 8 of the 9 counties have a return rate over 45%, lead by Marin County.

Click on a county for more information. Data is as of September 13.Map not displaying correctly? Click here to open in a new window.

Polls are showing that Newsom might hang on to the Governorship. A recent SurveyUSA poll showed 54% of likely voters will choose to keep Newsom in office, while 41% are expected to vote to remove him.

However, of those who are likely to choose a replacement, republican Larry Elder is in the lead. The same SurveyUSA poll had Elder polling at 29%, followed by democrat Kevin Paffrath at 9% and republican John Cox at 8%.