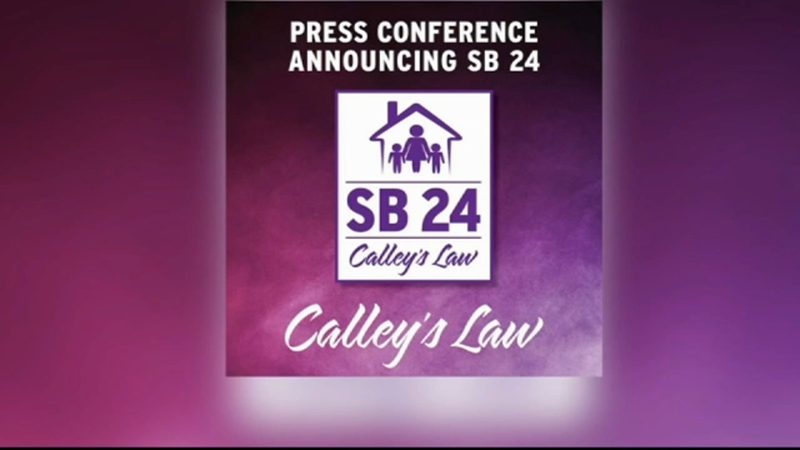 FRESNO, Calif. (KFSN) -- A Central Valley family's push for justice and change could save many other families from tragedy, through Calley's Law.

Last July, 32-year-old Calley Garay was shot to death while shielding her children outside of a health clinic in Madera.


Police arrested her estranged husband, 50-year-old Julio Garay, who is said to have known her location because of a medical appointment.
Loved ones say Calley did everything right as she mustered the courage to leave a years-long abusive marriage. The mother of three obtained a restraining order and went into hiding with her kids.

"It should be a lot easier to keep someone safe. I feel like she went through hoops and still she wasn't kept safe," said Calley's cousin, Sarah Rodriguez. "Calley died protecting her kids saving their lives and now in her honor, she will hopefully do the same for other women and save their lives."

State Senator Anna Caballero was the author of SB 24, now signed into law. It adds a section in a domestic violence restraining order in which a judge can hide school, daycare and medical records that could reveal a child's whereabouts to an abusive parent.

"We took a look at what happened, how it happened and felt very strongly that we need to make it very clear," said Senator Caballero.


She hopes this new law will help victims of domestic violence find the strength they need to seek help.

"To provide confidence for those individuals that want to leave an abusive situation. For them to know that there are protections for them," said Caballero.

Calley's family says it's their effort to help end the abusive cycle.
"So many times, the abuser uses the kids as another way to hold onto the victim," said Rodriguez.


For Chowchilla Police Chief David Riviere, this case was personal. He knew Calley since she was just a girl and eventually helped her escape the abuse.

"This really hits home to me," he said.

From a policing perspective, Riviere says the law will put more power on the side of the victim.

"It's just one more thing that assists law enforcement in actually taking some form of enforcement action," he said.