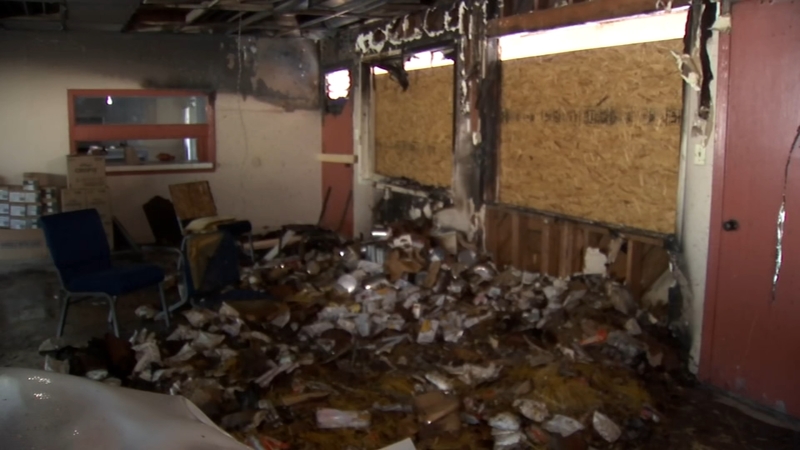 FRESNO, Calif. (KFSN) -- An investigation is underway after authorities say someone broke into a church at Olive near Orchard in Central Fresno and started a fire.

The flames damaged the building and destroyed several items that were supposed to help families in need.


The charred food had been donated to help feed families in the community.

"It breaks my heart to see that people who are loitering and breaking into buildings do not take into account the service you're doing to other people. We're trying to help people, that's all we're trying to do," said Pastor Justin Aguilar.

When crews arrived at the church, they quickly knocked down the flames but investigators are calling the fire "suspicious."

"The problem here is that we suspect it's an illegal, maybe intentionally set fires at this location," said Battalion Chief Tony Escobedo.

The church was vacant at the time so no one was injured, but the entire fellowship hall and kitchen were destroyed.

Much of the sanctuary suffered smoke damage as well.


"What we're concerned about with this fire is that they've had previous history of fires. We've had intentionally set fires is what we suspect. As to the motive, we're still investigating and who's behind that," said Escobedo.

The area has been a concern for investigators. They say someone also set fire to a car near the church Monday night as well -- but they are not yet ready to say the two are connected.

"We seem to get a lot of fires in that general area and whether it's contributed to homeless or an arsonist or somebody just being mean, we just don't know yet," said Escobedo.

While church leaders look to make repairs and wait for insurance money, Pastor Aguilar says this fire will not shake his congregation's belief.