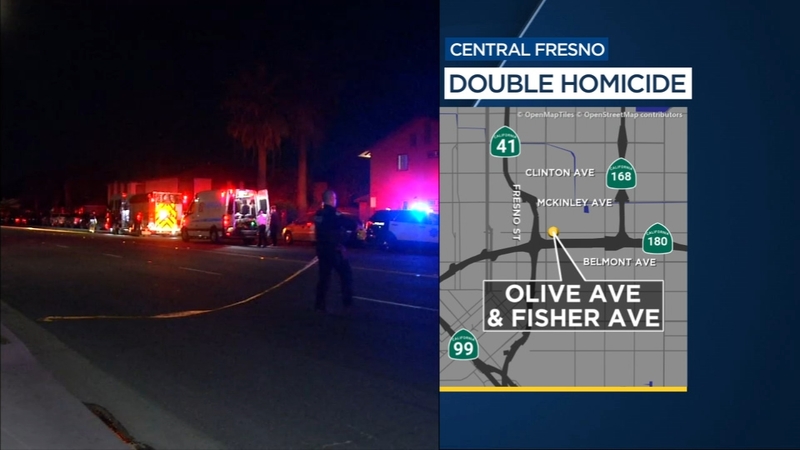 The suspect, 24-year-old Deandre Foster, has been arrested and booked into the Fresno County jail.


The original story follows below.
Fresno police are searching for the suspect in connection to the double homicide at an apartment complex in central Fresno Friday.

Officials say 24-year-old Deandre Foster is responsible for the shooting and killing of two women.

Police were called to the 3200 block of East Olive around 11:30 PM, where they found a 21-year-old mother of two shot to death inside the apartment and a 50-year-old woman with a gunshot wound in the courtyard. She was taken to Community Regional Medical Center, where she later died from her injuries.

Foster was in a dating relationship with the 21-year-old victim, according to FPD. The motive is unclear but authorities believe domestic violence played a role in this crime.

Fresno police have named 24-year-old Deandre Foster as the suspect for both murders.

"We'd ask that the public provide us with information should they have any information that's relative to this particular investigation," says Fresno Police Lt. Paul Cervantes. They can remain anonymous and call 559-498-STOP or the Fresno Police Department."

In the last month, a man was accused of killing his ex-girlfriend and her brother in Hanford.
A mother of six children was allegedly killed by her husband.


"That's usually the age when people enter into their very first serious relationship," she said. "So without that roadmap and having maybe one witnessed domestic violence as a child growing up in the home, you're going to repeat the same behaviors."

Since the COVID 19 pandemic, home has become even more unsafe for domestic violence survivors.

"Any threat of violence could result in something this serious and nobody wants to see it end this way," said Linder.