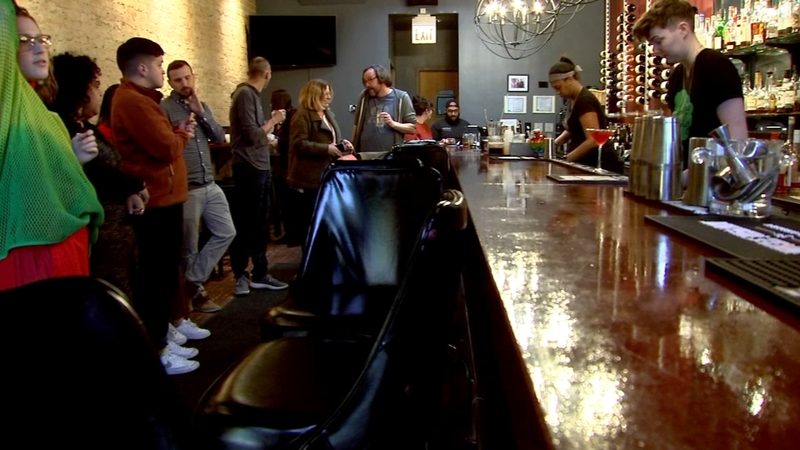 CHICAGO -- The number of LBGTQ+ and gay bars in Chicago and nationwide is declining, data shows. Experts say that could mean fewer spaces for some of the community, especially those with diverse backgrounds.

"We have had the experience of going into bars in you know, in our community, and not necessarily feeling welcome," said Angela Barne.

"People are so excited that we own this bar because they can see themselves in us folks, queer women of color," Riddle said.

Their community-based bar has thrived during the pandemic and even earned a coveted James Beard Award nomination.

"We fill a niche that most bars in the city do not," Riddle said.

In the two years since Nobody's Darling opened, more and more LGBTQ+ bars have closed.

Greggor Mattson, professor of Sociology at Oberlin College, is researching this troubling trend,

"And yet, in most parts of the country, gay bars are the only public LGBTQ+ place. In other words, they're the only place where queer people can reliably encounter other queer people in public," Mattson said.

In Chicago, Northalsted is a longtime home to many gay bars in the city. But some say many of those establishments may cater mainly to white gay men. As some LGBTQ+ bars close, gay men of color, transgender, non-binary people, and lesbians may lose out.

"When you don't have spaces like this it's harder to find community," Barnes said.

"If the only bar with a purpose-built drag stage closes, then it leaves drag queens and drag kings without a place to practice their art. If they're doing diverse things, then I get really sad when such a bar goes away because they're special," said Mattson.

He added that the decline of gay bars may be attributed to the growing popularity of location based dating apps.

It may not all be bad news; bars that may not be listed as LGBTQ+ are welcoming to the community.

Another positive, according to Mattson's research, is that 100% of lesbian bars nationwide were retained throughout the pandemic. However, Nobody's Darling is one of only a few women's-forward bars left in America.

"It's been sad because these were places where women really found community and you know, when you don't have that, where do you go," Barnes said.

She and Riddle both hope that their bar remains for years to come.

The study raises concerns over where certain bars may close. For example, if an establishment shuts its doors in a neighborhood like Andersonville or Northhalsted, it may not have a huge impact but if one closes in a neighborhood or a suburb where there aren't as many options, it may affect that community more.
Report a correction or typo
Related topics:
community & eventschicagolakeviewandersonvillelgbtq+social appsgaylgbtq+ pridebari teamconsumer
Copyright © 2022 WLS-TV. All Rights Reserved.
I-TEAM
Woman says stranger moved into her home, refuses to leave
Accused NYC subway shooter secretly questioned in cell: lawyers
EXCLUSIVE: Woman who coughed on Uber driver accused of ID theft
Woman loses over $90K in 'Tinder Swindler'-style scam
TOP STORIES
Tax refunds for CA: Here's what's included in new relief package
3 dead, at least 50 injured after Amtrak train derails in Missouri
Abortion protections to be on California ballot in fall
Target, Walmart weigh paying you not to bring back unwanted items
Nelson Esparza dropping defamation lawsuit against Garry Bredefeld
Visalia police searching for missing 72-year-old woman
Man killed in early morning shooting in Atwater, police say
Show More
Explosion at popular Fresno food truck injures 2, including minor
Lake Kaweah updates 'no wake zone' after dock failure caused by storms
Fowler Ave. from Olive to Clinton to be closed until September
SCOTUS sides with football coach who wanted to pray on the field
Tips to keep your dogs safe during Valley triple-digit heat
More TOP STORIES News