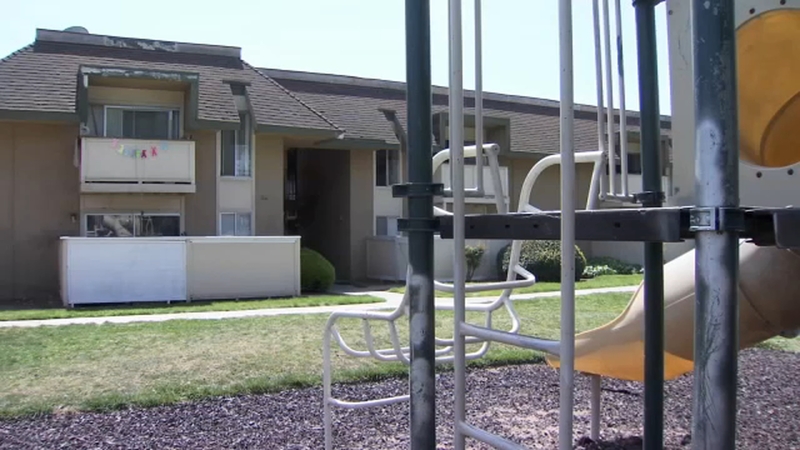 FRESNO, Calif. (KFSN) -- The playground at the Park West Apartments in northwest Fresno is calm and vacant now.

But on Wednesday night, it's where a 10-year-old girl was shot.

Fresno police officers responded to reports of gunfire on Alamos and Marks around 7:30 pm.

One mother who lives in these apartments asked us not to show her face.

She tells Action News she originally thought the gunfire was fireworks and was shocked to learn a child was shot.

"All I heard was like, 'They shot her, they shot her.' When I came outside, I looked and all I saw was everybody running around, the little girl was getting picked up from the floor and brought to the front of the apartments."

Investigators believe shots were fired after an argument between two other people near the playground.

A 10-year-old girl is recovering after a bullet fired during an argument hit her in the leg late Wednesday night.

When officers arrived, they found shell casings and a window blown out by bullets, but no victim.

A short time later, police were notified of a 10-year-old girl who had been shot.

She was taken to CRMC.

"As if that was not bad enough, the bullet struck a femoral artery and she was bleeding internally," says Fresno Police Lt. Bill Dooley.

Now, detectives are working the case and gathering surveillance videos.

But neighbors on the next block are still worried.

"It sounded like it was back and forth, two different shooters are what it seemed like," says Kayla McKay. "It did sound extremely close and just wanted to make sure no one got hit with any stray bullets."

Kayla McKay says it's a good neighborhood, but this is not the first time she's heard bullets from behind her home.

"It's like a different side of town, literally being on this street versus that street over there," she said.

Lynn Lindsey has lived in the neighborhood for more than 32 years.

She says she while she does feel comfortable in her home, she still has to stay on guard.

"We hear the helicopters go over and that's sort of an assumption that something is going on," she said.

The Fresno Police Department says it's working hard to make the community safe.

"We can't do this alone," Lt. Dooley said. "We need our community's help. We need everybody's help to make acts of violence like this not occur. It's just not acceptable."