About 40% of the state's vaccine allotment will be distributed to those Californians living in areas most at risk for the coronavirus.
KFSN
By Jason Oliveira 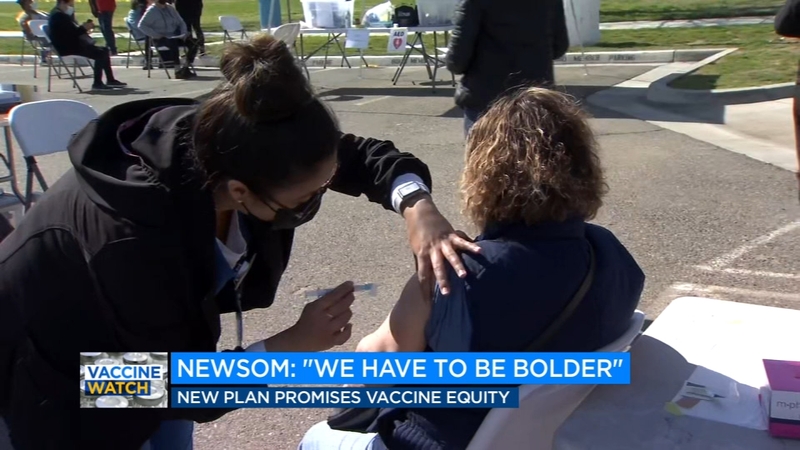 FRESNO, Calif. (KFSN) -- Another new vaccine plan is going into effect for California.

State leaders are promising more doses of the COVID-19 vaccine will be set aside for residents in vulnerable neighborhoods in Central California.

Governor Gavin Newsom confirmed on Thursday that about 40% of the state's vaccine allotment will be distributed to those Californians living in areas most at risk for the coronavirus.

Those doses will be spread out among 400 ZIP codes, making about 8 million people eligible for vaccines very soon.


Graphic not displaying correctly? Click here to view in a new window.

The governor did not offer much in the way of details, but he did say many of the eligible neighborhoods are in Los Angeles County and the Central Valley.

They were determined by the state's Healthy Places Index, which measures criteria including education and income levels.

The new plan promises to get those living in vulnerable communities vaccinated sooner rather than later.

An estimated 1.6 million doses have already been given in those designated neighborhoods.

While visiting Stockton on Thursday, the governor said once that number reaches 2 million, the state will make it easier for counties to move through the reopening tiers.
Right now counties in the purple tier, including Fresno, can move to the less restrictive red tier when there are 7 or fewer new cases per 100,000 people a day. But the new plan would ease that metric to allow 10 new cases per 100,000.

"It's just frustrating. Ok they're going to raise it to ten but the whole state averages like a 10.57 so that means if you're higher than that then you can't get into it," he says.

He was hoping to hear more tangible information from the governor that would allow restaurants like his Vino Grille and Spirits to reopen quicker.

"It's basically saying we're going to do something to get you open but we're not going to tell you what it is. So it is a disappointment that there were no more facts to it and there wasn't a plan in place and there wasn't something that we could actually look at that's hard evidence," he says.
Report a correction or typo
Related topics:
health & fitnessfresno countymadera countymerced countytulare countykings countycoronavirusfresno countycovid 19 vaccinecovid 19
Copyright © 2021 KFSN-TV. All Rights Reserved.
COVID-19 VACCINE
Biden to provide update on COVID vaccination efforts | LIVE
These 2 states made up 1/3 of all US COVID cases this past week
US hits 70% vaccination rate -- a month late, amid a surge
NYC to require vaccination proof for indoor dining, gyms
TOP STORIES
Biden administration to announce new efforts to limit evictions
Domestic violence suspect arrested after hours-long standoff in Fresno
Deadly weekend has Fresno police ready to change tactics
Nelly, Young the Giant, Midland coming to Big Fresno Fair this year
Officer dead after burst of violence outside Pentagon
Biden to provide update on COVID vaccination efforts | LIVE
NY Gov. Cuomo sexually harassed multiple women: Probe
Show More
2-year-old boy injured in car-to-car shooting in Fresno, police say
California Water Board to vote on emergency curtailment order today
Simone Biles wins bronze on balance beam
Car flips after hitting parked vehicle in central Fresno
Fowler City Councilmember Mark Rodriguez arrested on DUI charges
More TOP STORIES News