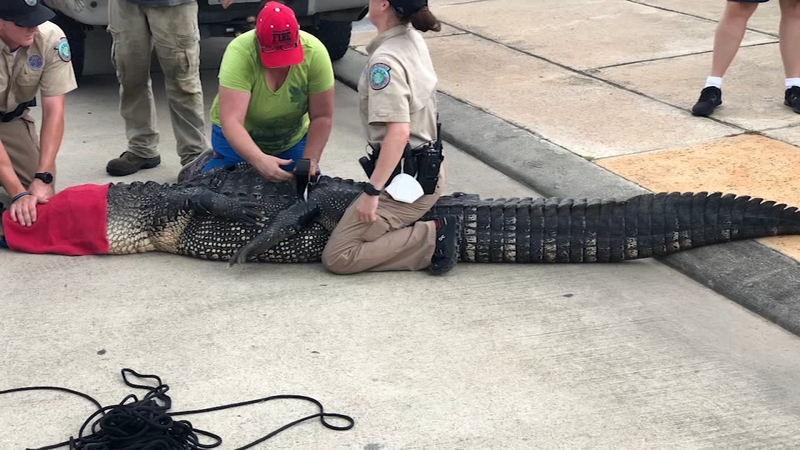 LEAGUE CITY, Texas -- A nearly 12-foot long alligator was captured late last month after a father saw it only feet away from his 4-year-old daughter in a canal behind their house in Texas.

The gator was spotted behind Andrew Grande's house in League City.

Brandalyn, Andrew's 4-year-old daughter, was fishing on the dock behind the house with babysitter Robin Randolph.

Grande said he went outside to give his daughter a goodbye kiss before heading to work when he saw the gator's head near the dock.

MUST WATCH: Bodycam video from the incident shows the officers save the girl's life. They were choked up recounting what they call a miracle.

He said he pushed Robin through the gate back into the yard and lifted Brandalyn over the fence.

The gator vanished back underwater and there was no sign of it for about 15 minutes. When Brandalyn went back outside, the gator popped his head back up, Grande said.

That's when Grande called for help. A pair of Texas game wardens, along with a professional gator wrangler, the gator wrangler's wife, Grande and a pool guy joined forces to wrestle the big guy out of the water and into a waiting truck.

According to the gator hunter, the giant reptile was 11 feet and seven inches long and weighed 478 pounds.