Man walks off with dirt bike in Madera, now police are searching for the suspect 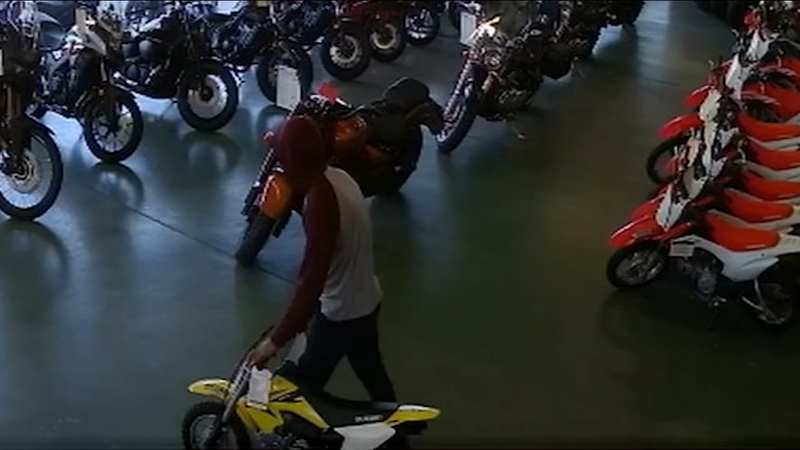 The man is shopping for a bike, but not to buy.

He was so stealth in his stealing last Tuesday morning, the owner and employees at first, didn't notice a motorcycle was missing.

"One of our employees walked up and asked if I had sold one of our small motorcycles and I said, no I didn't 'cause I was working in service all day," said owner Bob Wilson.

That's when they rushed over to their surveillance system to watch what happened.

The man makes a first attempt at taking the bike then leaves it as a customer approaches. He follows that customer to the parts department, to make sure that man is occupied.

And when the coast is clear, the thief grabs the handlebars of the bike and casually walks it out of the store.

Bob Wilson, the third generation of the motorcycle family, feels the financial impact of a crime that seems to have become more frequent over the 100-year history of the Wilson businesses in the Valley.

"It's hard enough to make a living in a small business or any business in California or anywhere and when people don't have any respect for your goods or what you're trying to do and just steal it, there are not consequences anymore," Wilson said.

The small motorcycle is designed for kids and is priced at $1700, but the total purchase costs would make it worth about $2400 -- a big hit to Bob's shop.

"I would just like to ask him why he thinks he's entitled to someone else's product. It's not his," Wilson said.

One of the people who called-in a lead about the suspect is a Madera probation officer.

Madera police then conducted a probation check on the man who they believe, might be the same man in the video.

He was not home at the time, and the stolen bike was not found at the location, but they'll continue to pursue the lead.