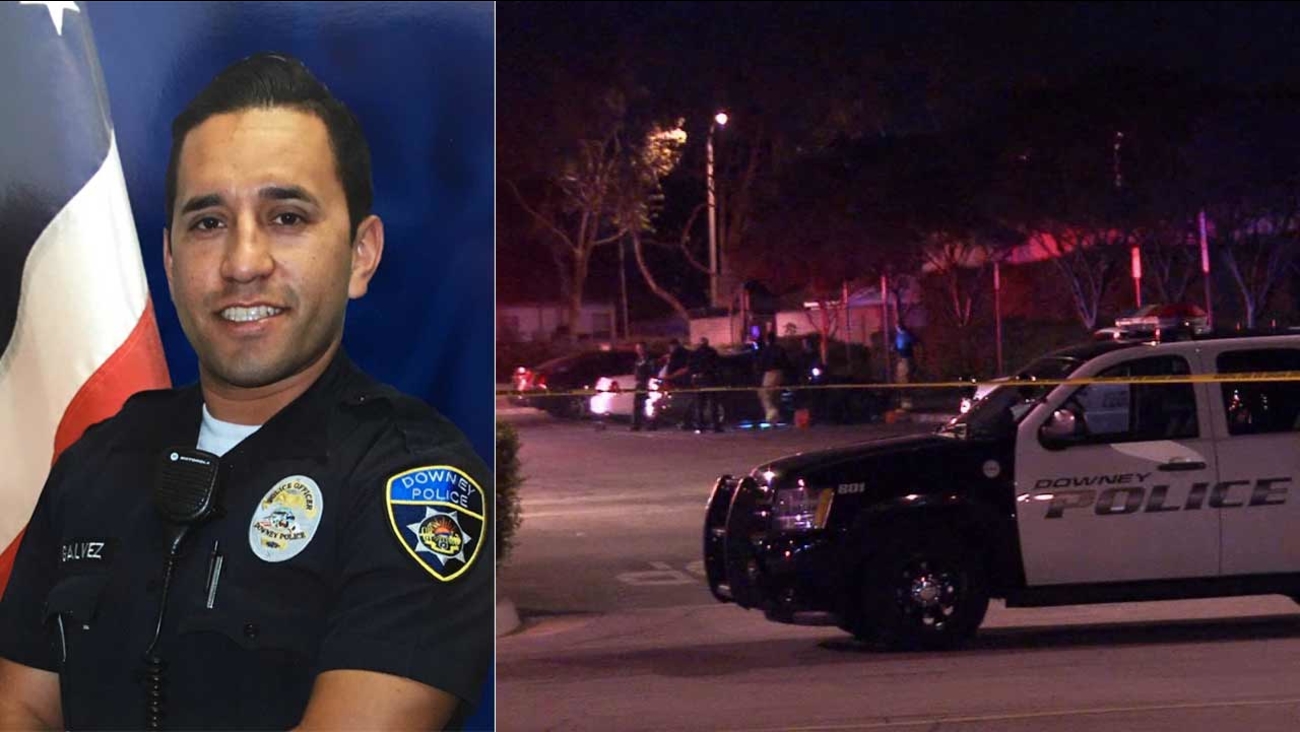 Downey police Officer Ricardo Galvez was fatally shot in the parking lot of the Downey Police Department in the 10900 block of Brookshire Avenue on Wednesday, Nov. 18, 2015.

DOWNEY, Calif. --
Los Angeles County sheriff's deputies are investigating the shooting death of a Downey police officer whose body was found in the parking lot of the Downey Police Department Wednesday night.

The police officer, identified as Ricardo "Ricky" Galvez, was found dead near a patrol car at the police station in the 10900 block of Brookshire Avenue shortly after 11 p.m.

Lt. John Corina said at least two suspects walked up to the police officer as he sat in the driver's seat of his own vehicle and opened fire. A fellow Downey police officer heard the gunshots and chased the suspects to the neighboring city of Montebello, where the suspects bailed on foot near Washington Boulevard and Carob Way.

"As luck would have it, a Downey police officer in his patrol vehicle heard the shooting, went in pursuit of the suspects, chased them into the city of Montebello, and that's where they bailed out of the car," Corina said.

Galvez had just got off work. It appears it was a targeted attack, Corina said.

Authorities taped off the entire parking lot area, and Downey police officers at the scene appeared to be emotionally shaken.

Galvez had been with the Downey Police Department for five years and had served as a U.S. Marine for two tours, Downey police Chief Carl Charles said.

Charles described Galvez as "a tremendous young man who loved serving the residents of Downey."

"His smile was infectious and his professionalism was always on display," Charles said.

A large perimeter was set up and evacuations were ordered in the Montebello area where the suspects fled from police.

Resident Victor Bocanegra said police knocked on his door shortly after 2 a.m. and escorted his family out to the street.

"They've evacuated some buildings and some townhomes, and they're looking for this suspect that killed a police officer," he said.

Bocanegra said he saw police put at least two people into patrol cars and drive away.

While authorities have released few details about the police activity in Montebello, a SWAT team was seen entering a residence in the area.

Washington Boulevard will be closed between Paramount Boulevard and Greenwood Avenue for several hours.