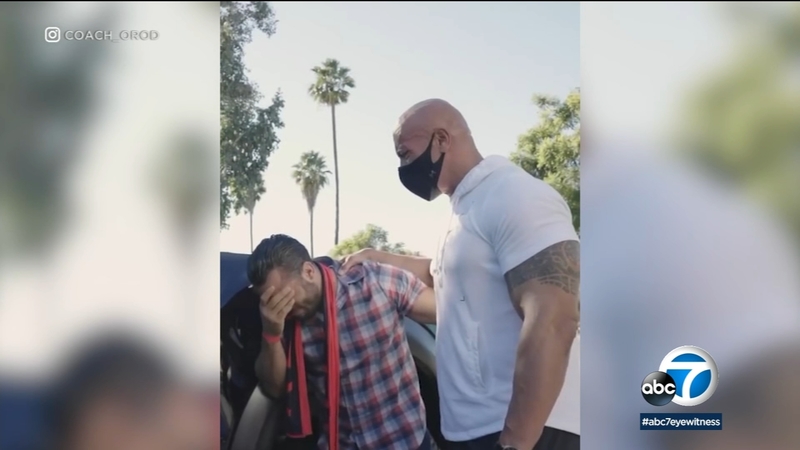 Johnson gifted his own custom-made truck to a Navy veteran from Culver City who is active in community causes and cares for his 75-year-old mother.

Johnson presented the truck to Oscar Rodriguez, who collapsed in grateful tears as he received the gift.

Johnson chose Rodriguez as part of a special screening for his new film "Red Notice" in a theater. Someone from a gym where Rodriguez used to work as a trainer nominated him, and film producers invited him to the screening. At the show, Johnson surprised Rodriguez.

Johnson later explained on Instagram why he chose Rodriguez:

"I gathered as much information as I could about everyone in the audience and ultimately, Oscar's story moved me.
Takes care of his 75 year old mom.
Personal trainer.
Leader at his church.
Provides support and meals for women victimized by domestic violence.
Proud & humble Navy veteran.
Kind human being."

The Rock says the original plan was to gift Rodriguez the Porsche Taycan he drives in the movie - but Porsche said no.

So instead he gave away his own personal Ford Raptor truck.

Rodriguez told Eyewitness News he is a fan of Johnson, particularly for his positivity and how he inspires others. He hopes to use the truck to pay it forward.

"I just hope and pray that this will inspire other people, will lift other people up," he said.

"I woke up today, counted my blessings," he said. "It's Thanksgiving. There's just so much to be thankful for."

"Just grateful that The Rock hooked me up with this whip. I'm gonna use it, baby. I'm gonna use it to encourage people and help people. And bring a lot of cheer to people. Rock, you the man."