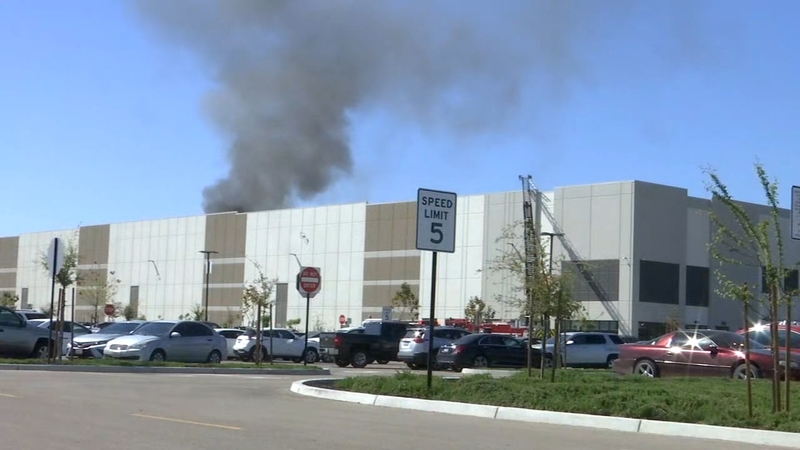 FRESNO, Calif. (KFSN) -- Smoke could be seen for miles, billowing from the roof of the Amazon Fulfillment Center.

More than 50 Fresno City firefighters responded, with some using ladders to get to the blaze.

"I heard the fire alarm," Munerlyn said. "I said, 'I knew something was going on.' I was pretty much the first one outside."

Firefighters say along with the sheer size of the building, the burning solar panels were a challenge for crews.

"You can't shut them off," Fulmer said. "It takes them time to de-energize."

Employees say they were allowed to leave early, but now a question is sitting in their minds.

"How long am I going to be without work," an anonymous person said.

We asked Amazon officials about the fire's impact to operations.

They responded with, "Our associates have been sent home with pay. The health and safety of our employees is our main priority, so we will not resume operations until our local authorities determine it is safe for our associates to return to the building."

Munerlyn, however, believes the company handled the situation well and doesn't think it'll take long for employees to get back to work.

"We are on the front lines as far as keeping people supplied with toilet paper and food," Munerlyn said.

There was a fire in our Fresno fulfillment center this afternoon that originated on the roof. It has been extinguished by the Fresno Fire Department. The health and safety of our associates is our number one priority and the site was safely evacuated. We are working with emergency responders to assess the damage and will re-open once local authorities determine it's safe to do so. We appreciate the efforts of our local first responders.
Report a correction or typo
Related topics:
fresno southwestbuilding fireamazonfirefighters
Copyright © 2021 KFSN-TV. All Rights Reserved.
AMAZON
Cyber Monday 2021 deals shopping guide
Black Friday 2021 deals shopping guide
'GMA's' Michael Strahan to go to space aboard Blue Origin
Amazon must tell its CA employees of COVID outbreaks, judge says
TOP STORIES
Firefighters battling large fire at abandoned building in Caruthers
Lawsuit against Visalia Police Department alleges excessive force
Unusual temperatures this time of year impacting Valley air quality
FS library could get name change after anti-Semitic writings resurface
Man shot and killed in northwest Fresno, police say
US moving to toughen testing requirement for travelers
Alec Baldwin speaks out on 'Rust' shooting in exclusive ABC interview
Show More
Reward offered for information on hit-and-run that killed Oakhurst man
Abortion rights at stake in historic Supreme Court arguments
FS quarterback Jake Haener enters transfer portal, ESPN reports
Armed robbery suspect arrested by Tulare County Sherriff's Office
Authorities: Student kills 3, wounds 8 at Michigan school
More TOP STORIES News