Leaders of Adventure Church told Action News they don't want to rent. They want to buy.
KFSN
By Corin Hoggard 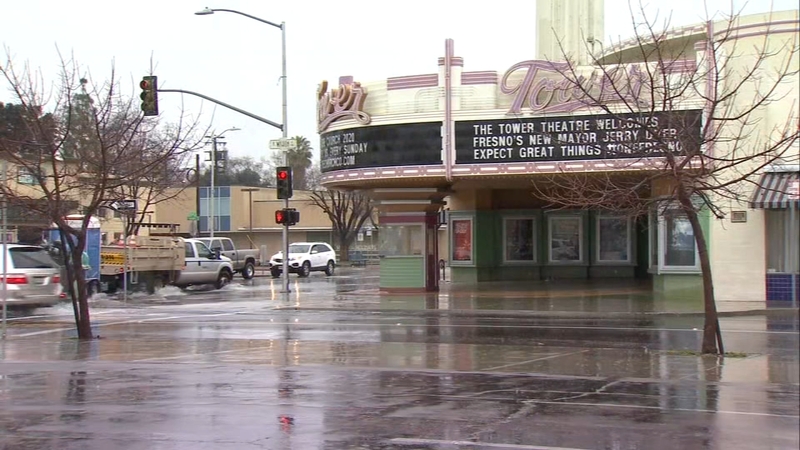 FRESNO, Calif. (KFSN) -- Fresno's mayor has made a peace offering to the church trying to buy the Tower Theatre - a new deal for a similar space.

But the mayor's proposal to move the church to the Veterans Memorial Building is already hitting serious roadblocks, less than 24 hours after he made it.

For the last 21 years, when the sun rises on the Veterans Memorial Auditorium, it lights up the home of Children's Musical Theaterworks.

But on Thursday, a cloud hung over CMT after Mayor Jerry Dyer offered up the auditorium as a possible solution for the church fighting to buy the Tower Theatre against the wishes of a lot of people in the neighborhood.

"Let's all hope and pray the Adventure Church takes advantage of this generous offer the city is providing and we can preserve the characteristics and identity of the Tower District and we can unify as a community and move forward," Mayor Dyer said.

The mayor offered the church cheap rent and renovations to the auditorium, which could also help CMT.

Fresno mayor @JerryDyerFresno has made an offer to Adventure Church he’s hoping will help avoid a legal battle over sale of Tower Theatre.
He’s offering the church the Veteran’s Memorial in downtown Fresno. pic.twitter.com/W1ZBZ6JMyv

But its children's productions featuring elaborate sets usually run three or four times a year -- with shows for two weeks on Friday and Saturday, plus Sunday matinees.

"Once our pieces are in there, there are moving parts," said KC Rutiaga, from CMT. "There are pieces backstage. It really wouldn't be possible for them to get in there and hold their services during that time period."

Mayor Dyer says he's confident the city can work out time sharing between the church and CMT.

But church leaders told Action News they don't want to rent. They want to buy.

RELATED: Fresno's iconic Tower Theatre to be sold to church

And church supporters told city council they don't like the idea of the move.

"It'd be moving Adventure Church from their current Tower District to another location out of the district where they reside," Becca Martinez told the Fresno City Council during their Thursday meeting.

The church says it's prepared to sue the city if it interferes in their purchase.

RELATED: City threatens Tower Theatre over church usage and violations, but could Fresno buy it?

But some other Tower business owners say the city needs to put its foot down and hold the line on zoning requirements that prevent a sizable building like the Tower Theatre from being used as a church or a convention center.

"We have nothing against churches or religions," said Terry Story, a co-owner of FAB nightclub in the Tower. "But as far as opening our business as a nightclub, we knew we could not open anywhere near a church or a school."