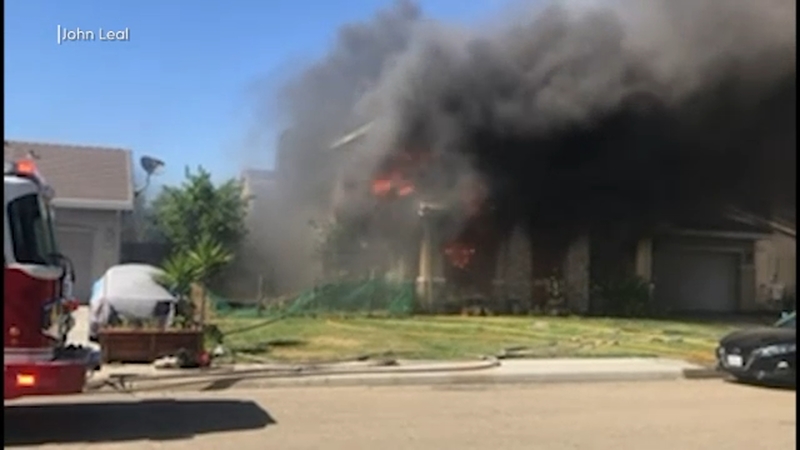 FRESNO, Calif. (KFSN) -- A southeast Fresno home was destroyed and one person was injured in a residential fire.

"In the back flames shooting up in the air, black, black smoke. I mean, this area was totally black," said John Leal.

Leal lives around the corner from the house on Hoxie Avenue near Peach and Jensen Avenues. Sunday afternoon, it went up in flames.

Other neighbors reported hearing an explosion before the fire.

"There are some propane tanks in the back that could be involved with the incident or secondary to the actual fire," said Fresno Fire Battalion Chief Devin McGuire.

Fresno Fire Department officials said the cause is still under investigation, but the homeowner was cooking at the time.

That man was also hurt in the fire, suffering second-degree burns to his face and arms. He is expected to be OK.

Everyone else was able to safely get out of the house before flames and thick black smoke overtook it.

"Right when I got here, the first truck was here. The back top story was engulfed in flames," Leal said.

Nearly a dozen fire units and more than 40 firefighters battled the house fire, which was challenging due to the weather.

"This was a wind-driven fire. I feel very fortunate that crews were able to get here as quickly as they were," said McGuire.

The house was completely destroyed.

The fire spread to a few outbuildings in the yard of this house and neighboring houses. They were damaged, but crews were able to prevent the fire from spreading to other homes.

Action News spoke with the residents off-camera, who said the fire shook them up. They will be staying with family as they work to rebuild.