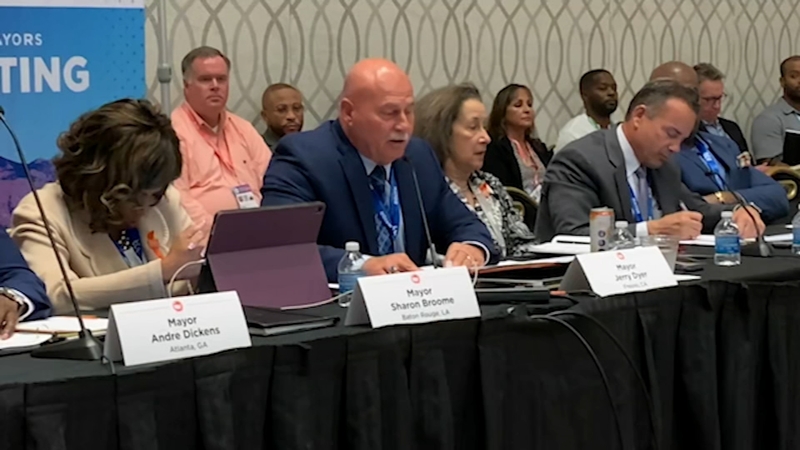 RENO, Calif. (KFSN) -- With the United States seeing at least five mass shootings this weekend alone, several mayors from across the nation are looking for answers.

Fresno Mayor Jerry Dyer held a discussion at the mayor's conference Sunday focusing on how local governments are using their American Rescue Funds for public safety.

For Dyer, it's one of the most important tasks he says he has as mayor.

"Our focus as mayors, our duty is to keep people safe," Dyer said. "If people do not feel safe in their communities, then nothing else we do really matters."

In May, Fresno Mayor Jerry Dyer rolled out his proposed budget.

It would allocate millions of dollars to improving public safety in the city by increasing the number of police officers in Fresno to 888 -- the most in Fresno's history.

But he says it goes beyond putting more boots on the ground.

"Not just things being done to add police officers, necessarily, but addressing those rooted causes that occur within our city," Dyer said. "I think a common factor for all of us is using those dollars to intervene in gang activity to reduce gun violence."

Sunday afternoon, on a panel with the mayors of Bridgeport, Baton Rouge, Newark, Toledo and Atlanta, Dyer discussed how cities could make people feel safer, even in the wake of increasing gun violence nationwide.

With recent mass shootings around the country, including in Philadelphia, Pheonix and Chattanooga just this weekend, Dyer said he and other mayors are working to increase public safety resources to try to stop mass shootings.

"It's not a partisan issue. It's not a Democrat or Republican issue," he said. "People of all political parties are dying. It's time to set aside some of our differences and focus on some sensible, reasonable strategies and solutions."

Mayor Dyer said Baton Rouge and Atlanta are focusing on youth programs aimed at getting young people ready to enter law enforcement. While Fresno has a similar program, he said the city needs to increase funding to get more people involved.

It would also direct $1.2 million to fund behavioral health specialists and clinicians to assess and respond to mental health-related calls.

"Not many agencies across the country have trained clinicians or (behavioral health) workers inside 911 centers. We're going to make sure that happens," Dyer said.