On this date in Bulldog history, a moment the Red Wave will never forget.
KFSN
By Stephen Hicks 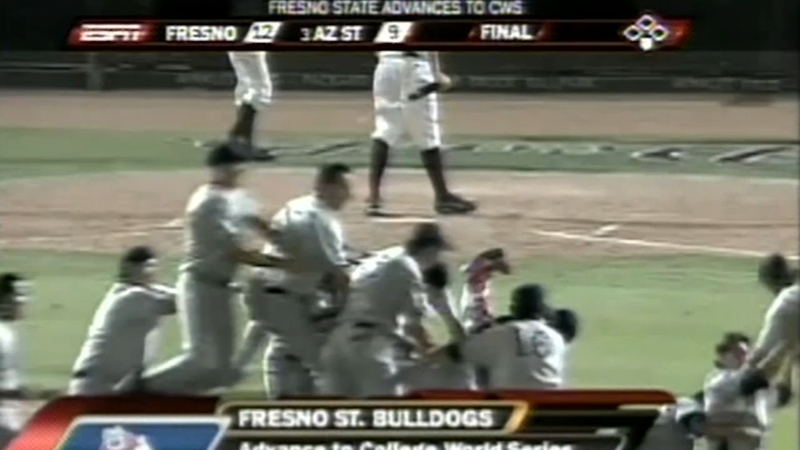 FRESNO, Calif. (KFSN) -- On this date in Bulldog history, a moment the Red Wave will never forget.

"When they held up the trophy, that's when I lost it. I just lost it."

But as remarkable as the accomplishment of this moment, so was the journey to get there.

The Diamond Dogs entered that 2008 season ranked 21st in the country but needed to win the WAC title just to get into the NCAA Tournament.

They did, and they never looked back.

First, against San Diego in the regional, then Arizona State in the Super Regional.

The Dogs beat ASU twice on the Sun Devils' home field to become the first #4 seed ever to make the college world series.

"A lot of nice texts and phone calls from other coaches in the league and they're all pulling for us hard," said Fresno State head baseball coach, Mike Batesole.

After a 17-5 drubbing of former conference foe Rice, the Dogs took two of three against North Carolina.

"I think we're just having a great time out here. It's fun being an underdog and it's fun upsetting these guys," said Fresno State infielder, Erik Wetzel.

Fresno State was now in the championship series, there in Omaha for what turned out to be all ten days of coverage for ABC30's Jason Oliveira.

"We actually went to Walmart and bought new clothes. We just didn't have enough clothes because we just didn't expect them to win," Jason said.

The first strike, and then a two-run homer from Steve Detwiler who was playing with a torn tendon in his left thumb.

"Who needs a thumb on one hand to hit?!" As it turned out, not Fresno State's sophomore right fielder, Steve Detwiler.

Detwiler set records for home runs, hits and RBIs in the college world series - his biggest swing came in the sixth.

With a 6-1 win over Georgia, the Dogs made history, becoming the lowest-seeded team in college sports to win an NCAA team championship.

Five players from that team went on to get drafted.

The win captured the hearts of the Central Valley.

Fresno State entered the NCAA tournament a mere 33-27 and one of the lowest seeds in the field. A few weeks later, Fresno State went from “underdogs to wonderdogs” in arguably the biggest Cinderella story in CWS history.

We caught up with the hero of that game, Steve Detwiler, about what stands out for him after all these years.

"From being in the games and being in the moment, I don't remember much about the game. You're so focused on that, but I can still close my eyes and go back into the moment where we landed and seeing the firetruck with the sprayer coming onto our airplane, getting out of the plane and seeing people with papers," Detwiler said. "People screaming at us on the bus ride home. It was madness and to feel the love from that Fresno community who was so close and loved their Bulldogs, that was something special.

"I remember that whole day and what an amazing day. My favorite memory, I think, was walking into Bulldog stadium for the first time after it happened and not seeing a space open. It was completely packed. Even the outfield was completely packed, that was probably the coolest moment for me in my sports career was that moment walking onto that field," he added.