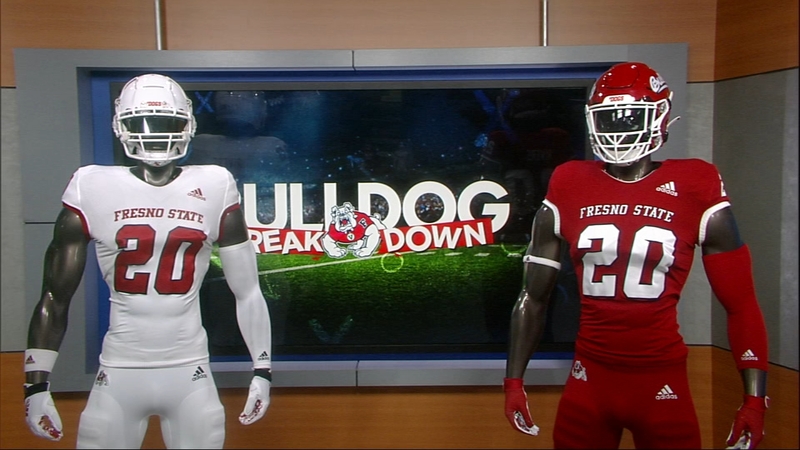 FRESNO, Calif. (KFSN) -- Red Wavers finally got to see the new threads their Bulldogs will be sporting when they return to the field.

This week, Fresno State revealed its new uniforms in a video on the team's social media page.

All 21 sports programs will get a uniform upgrade and the football team was the first to be revealed.

It's an attempt to modernize the brand, but also paying homage to the history and tradition of Bulldog football was important to the university.

The uniform's feature a deeper shade of red than in recent years -- but again -- something similar to those uniforms in the past.

Looking at uniformity when it came to font and style, school officials say it was easy to replicate what former Fresno State greats wore throughout the decades, representing not only the school, but also the Valley.

"That's who we are, that's what Fresno State football is, that's what the Valley is, that what our people are," says Senior Associate AD Frank Pucher. "We really did not feel like we need to do the flash in the pan, the new style. We felt like our tradition speaks for itself, our people speak for itself, so we just had to reinforce that and re-imagine how we present it."

One thing that's here to stay is the Green "V" on the back of the helmet, a tradition started by Coach Pat Hill during his tenure to represent the Valley.

In addition to these combos there's also an all white, all red and all blue uniform.

In all, there are more than 15 different color combinations they can roll out, with each uniform purposely made with the intent to mix and match schemes.

Not giving anything away, Pucher says regardless of the sports program, you are going to see a very consistent look moving forward.