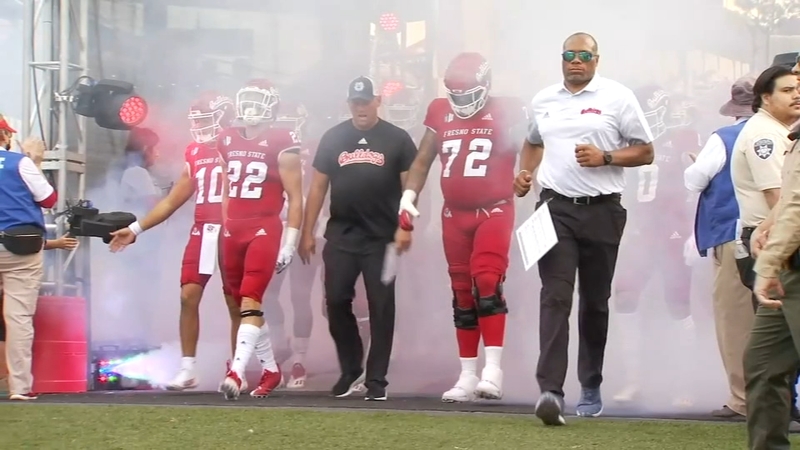 FRESNO, Calif. (KFSN) -- Heading into the final game of the regular season, it's no surprise that the word of the week for Fresno State football is "finish."

"We've been focusing a lot on that," said Dogs offensive coordinator Ryan Grubb. "Just even going back to '19 and thinking about that game finished."

We've been waitin' for this one.

That 2019 game finished 17-16 in favor of the Spartans in what would prove to be the final game for head coach Jeff Tedford.

"They didn't deserve to win that game. We were the better team, got a little chip on our shoulder, ready to roll and get out there and show them how we play football here in the Valley," said senior offensive lineman Dontae Bull.

This week, the Valley trophy on the line in Fresno's longest-running rivalry, a series that goes back 100 years to 1921 (FS leads overall series 42-38-3).

"They're both respected parts of the Valley, the Silicon Valley and then us here in the Central Valley (but) we got that V on the back of our helmet, so I think we should take it home with us too," Bull said.

"It's Thanksgiving, you know. We're all thankful for things, we want to be with our families but this comes first and we have to take care of business," said senior running back Jordan Mims.

With kickoff set for 12:30 PM, it could lead to extra exposure for the program.

"There's a handful of football games in general, not just college games. The NFL is on that day, so it's going to be really exciting to have that many people support us and watch us," Bull said.

For both teams, the stakes are high.

"Besides it being a rivalry game and a trophy game, they also are playing for a lot too," said head coach Kalen DeBoer.

With a win, the Spartans (5-6, MW 3-4) would become bowl eligible. If Fresno State (8-3, 5-2) wins, they would need a Boise State win over San Diego State on Black Friday to win the West Division and play in the MW title game.

BIG week ahead in the Mountain West 👀 https://t.co/42RVkK6dVK

But don't expect a Friday watch party from players and coaches.

"It really doesn't have anything to truly do with us," said defensive coordinator William Inge That's an uncontrollable that we really can't control."

Players echoes those thoughts after Sunday morning's practice with Mims, saying, "It's exciting knowing that but first off we have to take care of us winning."

Not only is there the chance to play in the title game, there's still a chance Bulldog Stadium could play host to the championship should Fresno, Boise and Air Force win this weekend.

In that scenario, FS & AF would meet in the title game with identical records & identical conference records. Without a head-to-head meeting, the tiebreak would be decided by a composite of computer rankings.

Fresno State needs to win v. SJSU, needs Boise State to win v. SDSU & needs Air Force to win v. UNLV for chance to host the MW title game at Bulldog Stadium.
A lot of ifs...but Vegas, who's in the business of making money, has the odds favoring the Dogs in all 3 of those games. https://t.co/JvRpKphIrg