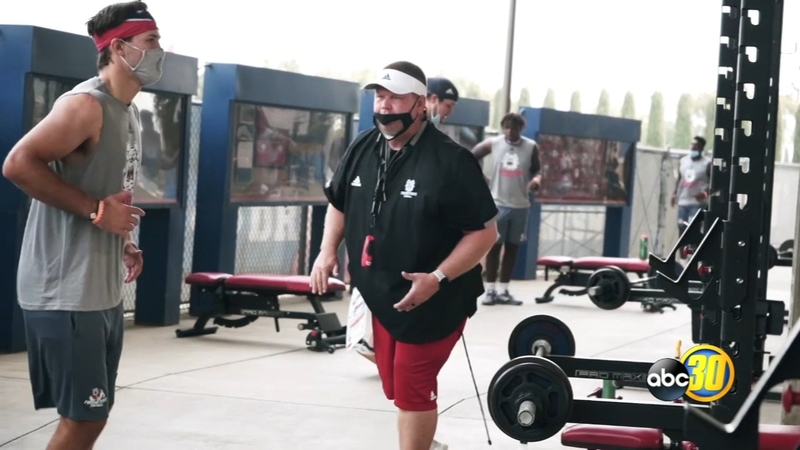 Add 42 tons of workout equipment in the concourse of Bob Bennett Stadium to the list.

"We've had to get really creative with how we schedule our workout," says strength and conditioning coach Ron McKeefery. "We can only get 26 people in that concourse. Lifting essentially three different groups on three different days, three times a week."

First-year strength and conditioning coach Ron McKeefery started in January and got eight weeks of building a foundation before COVID hit in March.

"Try to be creative as we possibly can to build both the culture as well as build the culture and some resiliency for the season," he said.

The 14 burpees challenge -- just one of a number of ways the coach kept his players motivated without knowing the end game.

Now his Dogs are back and in between wiped down weights -- readying for an October 24th start date.

"We've really just tried to lay the foundation right now to not put them in a vulnerable situation," says head coach Kalen DeBoer. "We're going to have little things because of the nature of the game of football, but overall injuries right off the bat is something we're trying to avoid."

That plan is conditioning heavy at the start.

"Using GPS data from last year, we were able to look at workload from a normal game week and then kind of reverse engineer that back to figuring out how many plays that we need to be taking and how can we ramp that up," McKeefery said. said.

The first three days back, the Dogs were at 50 percent of their usual workload. By the end of week one, that had jumped to 80 percent.

"And since then, we've had kind of an inverted pyramid to where we're obviously doing more football now and getting our conditioning through practice," McKeefery said.

Even that plan subject to daily change on whether the team practicing in full pads or just helmets.

"We're playing chess almost every day," McKeefery said. "And coach DeVoer and myself and the coordinators, we go into the submarine room and come out with a plan for each day."

All that's left now is to see if that work will have the Dogs ready for week one against Hawaii.