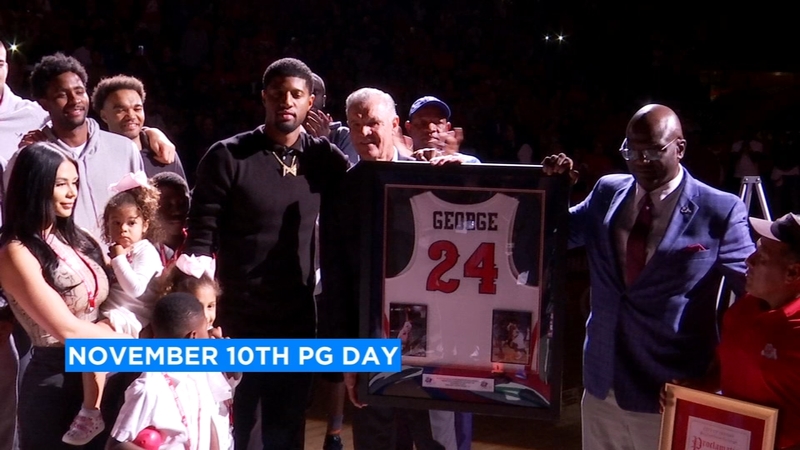 George is the highest ever draft pick in the NBA to come out of Fresno State. He was selected 10th overall in 2010. He is now a six-time NBA All-Star and an Olympic Gold Medalist. He joined the Los Angeles Clippers this season is expected to make his debut in the coming weeks.

Doc Rivers, Steve Balmer and a bunch of Clippers stopping by the Save Mart Center in Fresno to honor Paul George as his jersey is retired. @ABC30 pic.twitter.com/2U4cEurMzt

The City of Fresno announced that November 10th is officially "Paul George Day."

"This is a place where I called home, a place where I enjoyed my team here. Honestly, I gave everything I could've in my littler scrawny body back then," George said. "Wouldn' t have dreamed this in a million years to be able to come to Save Mart Center and look up and see No. 24 hanging in the rafters."

The men's basketball team went on to beat Winthrop 77-74 on a buzzer beating three pointer by freshman Mustafa Lawrence.

Former San Joaquin Memorial standout and one of the nation's top recruits Jalen Green was also making his official visit to the school. He's set to make a decision on college following his senior season at Prolific Prep in Napa, CA.

Finally, Jalen Green, the No. 3 recruit in the country just so happened to be making his official visit. We jump out of the way as @FresnoStateMBB was coming back onto the court for the 2nd half. One of the players running by shouts "Come to Fresno!" 😂 @ABC30 pic.twitter.com/qCaFsVWTOw