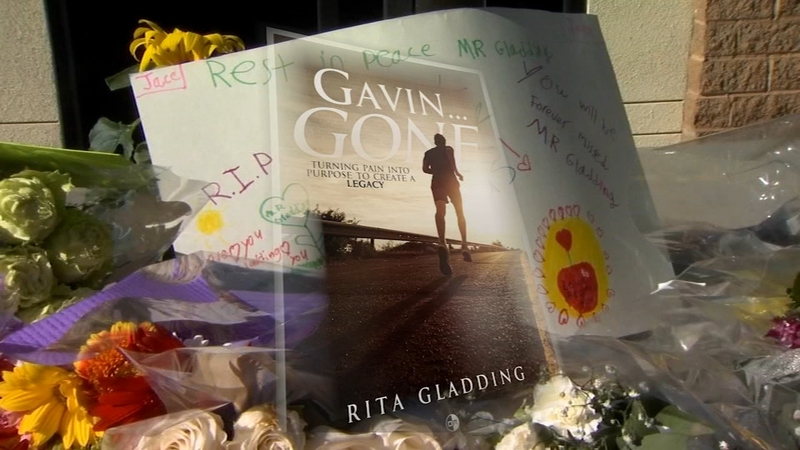 FRESNO, Calif. (KFSN) -- With the writing on each page, a grieving mother is turning her pain into purpose with her book, "Gavin Gone."

Author Rita Gladding writes in her prologue, "All of our lives are filled with an abundance of numbers, dates and statistics to remember, revisit and ponder."

For Rita, those numbers stem from the day tragedy struck -- September 16, 2018, the date Rita's son, Gavin, was killed by a hit and run driver.

The beloved husband, father and Clovis Unified educator was training for a marathon when he was struck in the pedestrian lane of Friant road.

Rita says, "As we walked through the emergency room, it was kind of like walking a gauntlet and there were nurses on both sides. Just the look on their face told me that this was a lot worse than I thought."

At the end of that pathway was where doctors told Rita her only son wouldn't survive his injures.

Hours later, Gavin's mother would get another devastating blow.

Rita says, "Two people were in the car that killed him, and there was another gentleman they called in. They had gone back to the scene of the crime twice that morning two hours after killing him to make sure there was no evidence left. I felt betrayed, pretty much sick to my stomach. How can a human being do that?"

The three people involved in the crash, including the driver, served less than three years in custody combined.

"They're out there living their lives and my two grandchildren, who were eight and 10 at the time, will never have their father again," Rita said.

By November, Assemblyman Jim Patterson, Rita and loved ones led the charge to stiffen penalties for hit and run drivers.

"Gavin's Law" would have increased the minimum prison sentence for hit-and-run drivers who kill someone from four years to six, but the bill never made it to the governor's desk.

As the prologue reads, the book isn't about grief. It's about a road to healing. Something Rita hopes to bring to other families navigating similar pain.