Confrontation between SoCal police and suspect caught on video 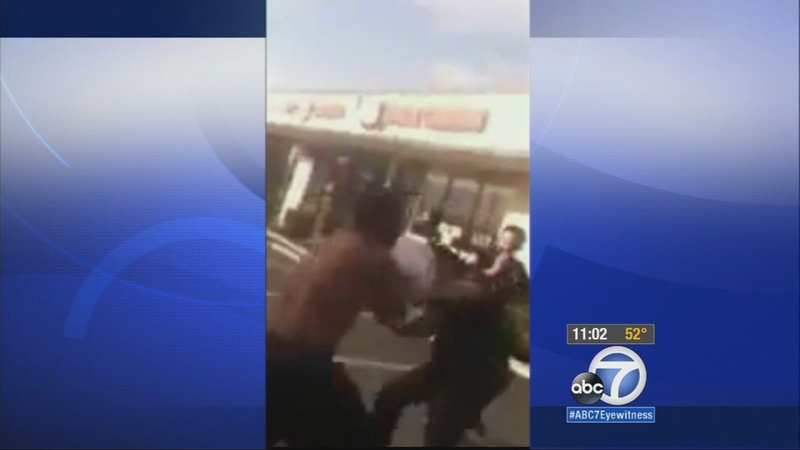 HAWTHORNE, Calif. -- A confrontation between a suspect and two Hawthorne police officers has gone viral on social media.

In the video, Hawthorne officers arrive at a scene where suspect Thomas Christopher Brown is asking people for money, and threatening those who won't give it to him.

The video shows Brown throwing a punch at one of the officers. Both officers deploy their Tasers, but they don't work, because Brown's clothing is too thick.

Meanwhile, an onlooker is screaming obscenities at the officers. One officer pulls Brown's shirt off, yet the suspect keeps fighting and eventually knocks an officer to the ground. That is where the video stops.

"He just continued to fight until we were able to take him into custody," said Lt. Aimee Yoshida.

"Both officers had facial and head injuries. They are both OK, though. One now has a cut over his eye and some swelling and a chipped tooth, and the other officer has a knot on the back of his head," said Yoshida.

According to Timothy T. Williams, Jr., who is a police procedure and use of force expert in state and federal courts, the officers used extraordinary restraint.

"You don't see too many officers taking punches to the face, and getting knocked down without escalating the use of force," he said. "Most officers would go for a grappling take down, they would tackle the individual, try to take him to the ground, they would bring a baton out."

Last year, Hawthorne police were criticized after officers shot and killed a dog. There have been protests from coast-to-coast over police using excessive force after the deaths of Michael Brown and Eric Garner.

In the Hawthorne case, Brown is unhurt, but behind bars.

"We're very happy that our officers showed the amount of restraint that they did," said Yoshida.

Hawthorne police say within the last five years, Brown has prior convictions for obstructing and resisting an officer causing injuries, and lewd acts against a child.