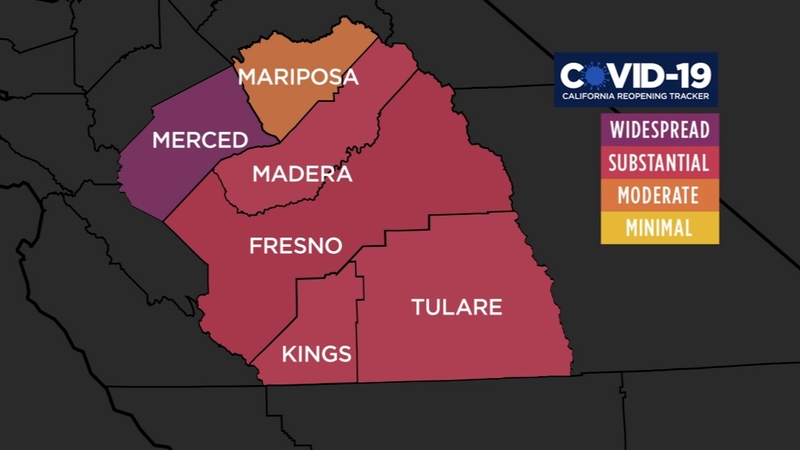 FRESNO, Calif. (KFSN) -- Fresno, Kings and Madera counties have now met the metrics to move into the red tier of California's reopening system.

The move puts the three counties in the 'substantial risk' tier, which allows for more businesses to reopen. Restaurants can now open indoors at 25% capacity. Movie theaters and gyms can also welcome back customers inside.

Hours after the tier changes were announced, Fresno State announced that starting April 1, it would allow a limited number of family members and guests of Bulldogs student-athletes and coaches to attend outdoor home sporting events.

Fresno State has announced that a limited number of family members and guests will be allowed to attend outdoor sporting events beginning April 1! @ABC30

On Tuesday, Fresno County businesses were busy preparing to reopen under new modifications.

Dog House Grill said to-go orders and limited patio dining had helped sustain the restaurant during the pandemic, but preparations are underway as the restaurant gets ready to open up indoor dining on Wednesday.

"It's just brushing everybody up on what we've done in the past, sticking to our routines, buying into the system we've created for our employees," said general manager Matthew Billingsley.

For restaurants like Dog House Grill, which has been following state guidelines and only seating outdoor while in the purple tier, the change in tiers will allow them to serve more dine-in customers.

"This allows us to get a little closer to normalcy and it's a great move in the right direction," Billingsley said.

At the Fresno Chaffee Zoo, Spring Break was well underway as families visited all of the outdoor exhibits.
The Reptile House which showcases snakes, turtles and more has been closed to the public because it is indoor.

Starting Wednesday, it is allowed to reopen at 25% capacity.

"It's a really exciting spot for a lot of our guests, young and old, so we're really excited to open that up and have people back in there," said marketing manager Brandi Gamoning.

While the state is allowing it to reopen, zoo officials said they're still working internally on logistics and don't have an opening date just yet.

"The biggest part is making sure that we have staff on hand to be able to monitor that area and give that guest experience and help keep our guests safe." said Gamoning.

Even though museums can reopen at limited capacity, the Fresno Art Museum said because of technical issues with its building, it won't be opening for up to a month.

The Fresno Arts Council said Art Hop, a popular event downtown, said it will also not be starting up anytime soon because it's hard to limit the amount of people who take part.

Instead, officials said they'll be waiting until Fresno County reaches herd immunity or until we reach the yellow tier.

A boost to Valley tourism

Madera County's shift to the red tier will bring tourists back to areas like Yosemite, Oakhurst, and Bass Lake.

Rhonda Salisbury, the CEO of Visit Yosemite Madera County, has been in the tourism marketing industry for 30 years.

She's hoping this new change that shifted the county to the red tier will bring tourists back to areas like Yosemite, Oakhurst, and Bass Lake, which could bring a significant boost in business.

"The economic impact is huge because tourism is the number one economic driver in eastern Madera County," she says. "We are very excited to get back to being what we are - California is tourism."

Robert Snyder is the chef at the acclaimed fine-dining restaurant, The Elderberry House, in Oakhurst.

He says he's excited about this significant change but says guest safety is still his top priority.

In the red tier, he says he will be able to bring back dozens more staff.

He will open reservations for inside.

Plus, he's happy to allow for more dining options for the Easter holiday and as it gets warmer.

"The more we stand out, the more the park stands out, and the more we can potentially bring in this season so we can all break even from last year, that would be nice," Snyder says.