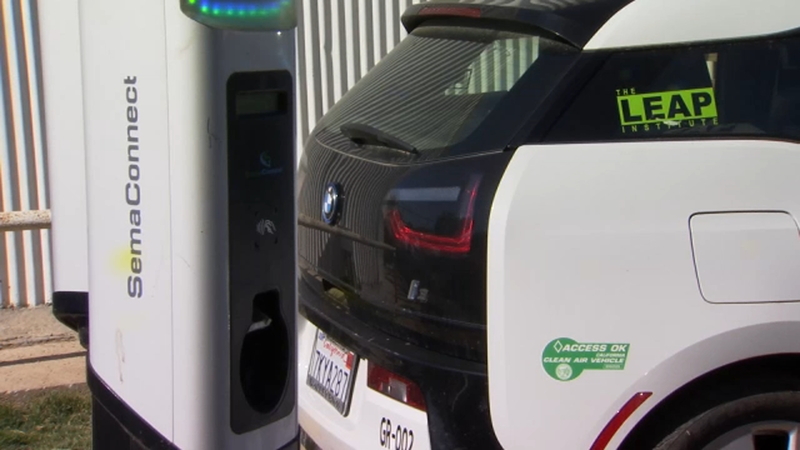 FRESNO, Calif. (KFSN) -- In rural parts of the Central Valley, something as simple as getting to a doctor's appointment can be a challenge.

In an area that also struggles with poor air quality, Huron's mayor is taking action to help people with their overall health and reduce his city's impact on air pollution.

The nearly 7,000 people who live there are predominately farmworkers with a median household income of $31,000 dollars a year.

To give residents better access to critical services such as a doctor appointments, he created the free rideshare program Green Raiteros.

"'Raiteros' comes from 'raite.' 'Raite' is a Spanglish term that comes from ride," said Leon.

It's the Green Raiteros because the fleet is made up of 100% electric vehicles which charge right next to the non-profit's headquarters.

As an environmental justice activist and advocate, Leon said it was important they use electric vehicles because the San Joaquin Valley has some of nations worst air quality.

Experts say one of the main contributors to that pollution is large trucks that use Highway 99 and Interstate 5.

Using electric vehicles also allows Leon the opportunity to apply for grants to help fund the program and keep the rides free for clients.

The idea for the Green Raiteros came, in part, from Leon's struggles as a child.

He once needed to get to a dying cousin and traveled the 52 miles north to Fresno by bus.

"I think it was 13 stops and it took three hours to get there," said Leon.

He didn't want his community to have to struggle to get to essential services, so now residents just have to register as a client, reserve a ride a few days in advance and a driver will pick them up.

That's what Jesus Contreres came in to do as we were speaking with the mayor.

He needed a ride to a doctor's appointment about 50 miles away later that week.

Gregerio Hernandez uses the service several times a week to get to dialysis, which is about 20 miles away.

His wife Soledad Lamos says the free rides are a lifeline.

"For us, it has been a huge support," Lamos said in Spanish.

Hernandez's doctors appointments are anywhere from 20 to 60 miles away.

Before the Green Raiteros, the trips were adding to their cost of healthcare.

Mayor Leon hopes the rideshare program will encourage other cities to see how beneficial going electric is for the environment and give his residents peace of mind to get to where they need to go.