Hurricane Dorian's path: The latest forecast from the Carolinas to New England 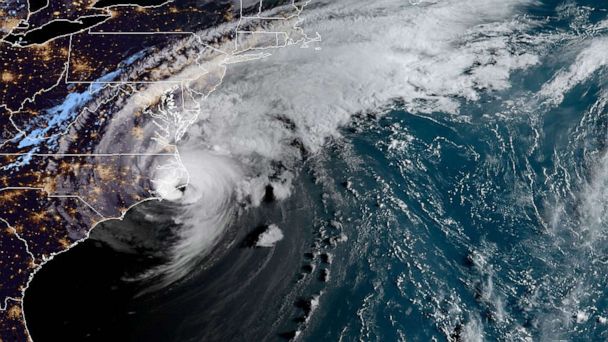 After days of churning up the coastline, Hurricane Dorian made landfall Friday morning as a Category 1 storm.

Here's what to expect and when, according to the latest forecast.

Dorian made landfall over Cape Hatteras, part of North Carolina's barrier islands of the Outer Banks, at 8:35 a.m. Friday.

The hurricane is continuing to batter North Carolina, bringing wind gusts over 100 mph to the Outer Banks and over 1 foot of rain to eastern parts of the state.

The torrential rain, combined with storm surge, prompted a flash flood emergency in the Outer Banks.

Rainfall totals could reach 15 inches in parts of North Carolina and South Carolina through Friday night.

As Dorian speeds out to sea Friday night, it'll impact the Northeast, grazing the coast with heavy rain and gusty winds Friday night into Saturday morning.

A coastal flood advisory was issued for parts of New Jersey, New York and coastal Connecticut, and a high surf advisory is in effect from New Jersey to Maine, where waves could be as high as 10 feet.

The hurricane prompted dangerous rip current warnings so New York City is closing all beaches to swimming and surfing on Friday and Saturday, parks officials said, according to ABC New York station WABC.

A tropical storm warning was issued for Cape Cod and eastern Maine where residents could see winds up to 60 mph.