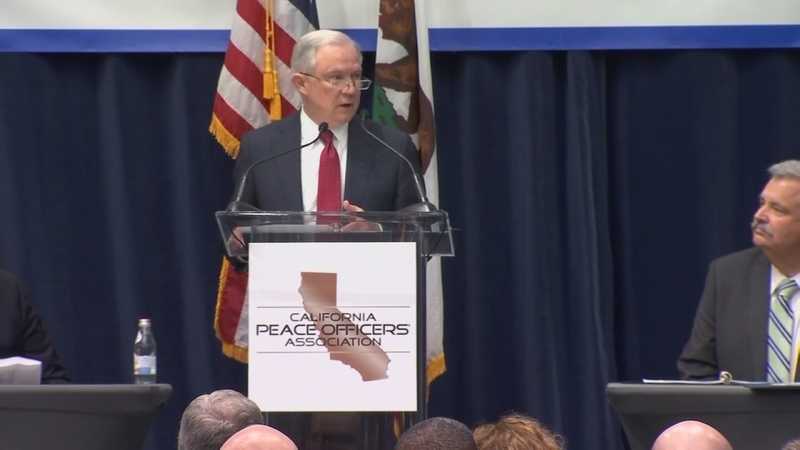 SACRAMENTO (KFSN) -- Speaking in Sacramento on Wednesday, U.S. Attorney General Jeff Sessions, came with a warning, he says that California state laws are putting citizens at risk while preventing federal employees from doing their job.

"California is using every power it has, and some it doesn't, to frustrate federal law enforcement," said Sessions. "So you can be sure I'm going to use every power I have to stop them."

The speech comes just one day after the Trump administration announced they were suing the state over current immigration laws.

Outside the venue, hundreds of protestors showed up to rally against Session's message.

"We see what he's doing and it's another attempt to thwart whatever we're doing to protect our family and we're not going to stop," says Eddie Carmona, political director for PICO California, a community-organizing network.

The Justice Department has targeted California Senate bill 54, which was passed last year, and limits how much local law enforcement can cooperate with federal immigration employed. Another law targeted by the department prevents Immigration and Customs Enforcement agents from coming into a worksite without a warrant.

Sessions says these laws are unjust. California Governor Jerry Brown says Sessions' claims are not true, "It's more like FOX News than what's going on in Washington, and it's not about the truth, it's not about protecting our state, it's about dividing Americans."

California Attorney General Xavier Becerra says the state is not preventing federal agents from doing their jobs, "under the laws nothing stops them from coming to a jail. The release records are public. Nothing stops a sheriff from working with ICE."

Fresno County Sheriff Margaret Mims attended a closed meeting between Sessions and other California law enforcement officials after his announcement.

Mims says the Attorney General expressed his support for law enforcement. She says that current sanctuary state laws are making it harder for Central Valley deputies to work with ICE agents. "Any time a state wants to regulate how we deal with our federal law enforcement partners, I think that's wrong," says Mims. "We are law enforcement professionals, so to indicate that we are treating some people differently, I think is a straw man argument."