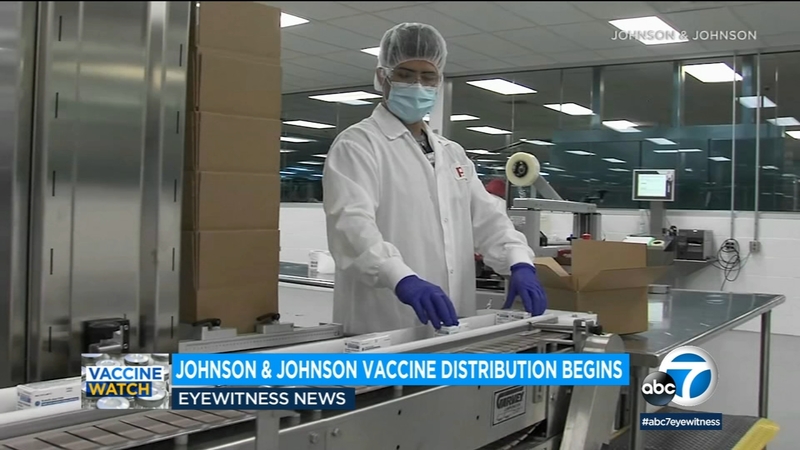 LOS ANGELES -- Nearly 4 million doses of Johnson & Johnson's single-dose COVID-19 vaccine are headed to states, including California, with injections expected to start as early as Tuesday.

The White House says the entire stockpile of the newly approved vaccine went out Sunday night. J&J will deliver about 16 million more doses by the end of March and 100 million total by the end of June, but the distribution would be backloaded.

According to Gov. Gavin Newsom, California is expected to receive about 380,000 doses this week.

Unlike the Moderna and Pfizer vaccines, Johnson & Johnson's shot requires only one dose and doesn't need a specialized freezer for storage, making it easier to administer.

RELATED: The US is about to get the Johnson & Johnson vaccine. Here's how it's different from the others
EMBED More News Videos

The U.S. Food and Drug Administration issued an emergency use authorization for the third COVID-19 vaccine developed by Johnson & Johnson.

The newest vaccine has shown to be 85% effective in preventing severe or critical illness.

At clinical trials, it has also shown to be effective against the South African and Brazilian variants.

Doctors say just because its efficacy is slightly lower than that of Moderna and Pfizer's vaccines, this is a not a second-rate vaccine.

"We're shipping 4 million (doses) over the next several days, we then expect to have about 20 million having been delivered by March and then we'll be on this path to do 100 million by June of this year," Alex Gorsky said. "And remember that's all en route to doing almost a billion doses over the course of 2021."

Johnson & Johnson says its planning to test its vaccine on children, newborns and pregnant women soon.