51-year old Jose Pulido was crossing the street on the crosswalk when the collision happened.
KFSN
By Brittany Jacob 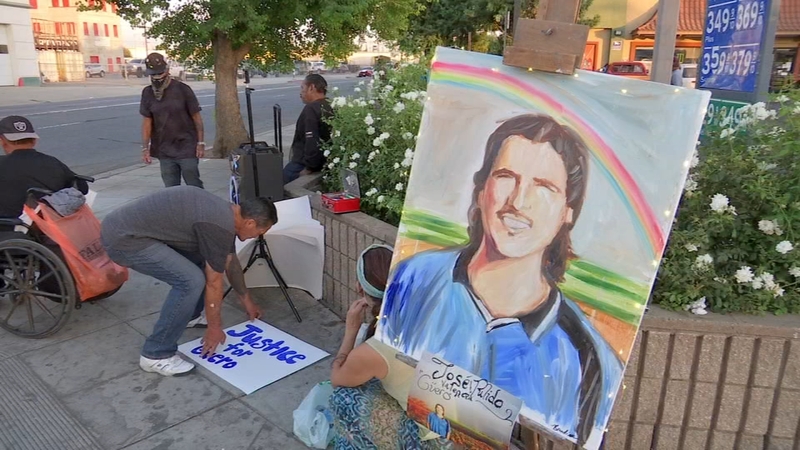 According to Fresno Police Department, 51-year old Jose Pulido was crossing the street on the crosswalk. He later died from his injures at the hospital.

This incident happened at around 9:30 pm on Saturday, September 5th. Three weeks after the deadly collision in downtown Fresno near Fresno and E streets, his friends and 'street family' honored him.

"We might be homeless but we are human," Dez Martinez, the organizer of the vigil, said while addressing the group standing on the corner.

Loved ones bowed their heads, and with signs and small lights in their hands, spoke about Pulido.

"Unfortunately his life was taken from us and that's why we are here - to remember him, to say that homeless lives matter," Martinez said.

Fresno Police Deputy Chief Michael Reid told Action News that the on-duty detective was driving west on Fresno Street with a green light while Pulido pushed a bicycle in the crosswalk. Pulido was hit, and Reid said, the victim did not use the traffic control signal.

Reid said that officer stayed at the scene and rendered aid.

"It breaks our heart. We are here to save lives, and in this case it's just an avoidable accident that tears the family apart and tears this officer apart," Reid said.

Kevin Little is the attorney for the victims' family. He claims there's more to the crash than what police are revealing.

"My response is it's pretty evident to me that not all the all the facts are being exposed," Little said.

Martinez does advocacy work for the homeless in Fresno. She asked, "Why is there not awareness raised on it? No matter what your position is here in Fresno California, everyone should be held accountable."

Friends hope to remember Guero, as he was called, with positivity - a man with a love for life.

One friend, David Ruiz, said, "You know he made you feel good because he always had a smile, he put a smile on your heart, he was such a good man."

Fresno is seeing an uptick in pedestrians being killed in traffic fatalities, so Reid cautions pedestrians to obey traffic signals.