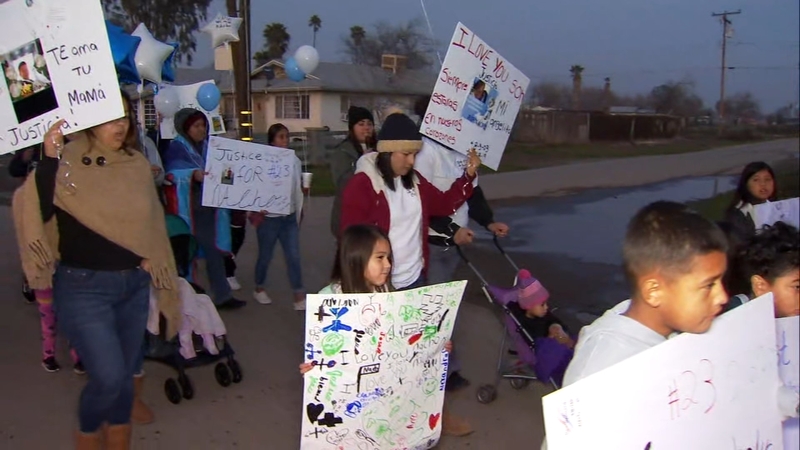 This group isn't asking, but demanding those responsible for killing 16-year-old Ignacio Lemus, known as "Nacho," stay behind bars.

"The people that killed him, they can still see their family in court, they can still have visitations," says Billie Walker, a close friend. "But Raquel will never see her son again."

A group of Lemus' family and friends marched through his hometown of Alpaugh to have their voices heard.

They held signs, some of them made by Lemus' youngest siblings and cousins, reading, "I love you."

"His brothers and sisters, they looked up to him dearly and they will never have that again," Walker said.

It's been three months since Lemus was shot and killed in Earlimart.

Lemus' mother, Raquel, can't help but cry whenever she talks about her son.

She says the pain is still the same as the day he died - it's taking a toll on her.

"I've been very sick," Raquel said. "I've gone to the doctor and they've told me they're very worried about me. I've lost more than 10 pounds."

To make matters worse, a cross placed where the teen died has been defaced at least four times.

"What do the people doing it, what do they get out of that," Walker said. "They drive all the way out there to do that and then get in their car. How do they feel doing that?"

The march was escorted by Lemus' white Camaro. His mother says he always dreamed of owning that car since he was a little boy.

After getting a job and saving up for a few months, he finally got his car.

"His wish came true of owning a Camaro," Raquel said. "It was only granted for the three months he was able to use it."

Suspects Fernandez and Macias are being held at the Tulare County Jail on no bail.

And that's where Raquel wants them to stay.

Their next court appearance will be in March.
Report a correction or typo
Related topics:
alpaughshooting
Copyright © 2022 KFSN-TV. All Rights Reserved.
TOP STORIES
Heavy law enforcement activity near Reedley, roadways closed off
78,000 pounds of infant formula arrives in US
Fresno police catch suspect after he falls out of Save Mart ceiling
ABC30 editor spotted suspect in Fresno Save Mart, alerted employees
Something strange is happening with our universe: NASA
Woman badly burned after Hanford home catches fire
Wisconsin couple kills bear that attacked them in their home
Show More
A new billionaire has been minted nearly every day during the pandemic
Fate of 2,500 Ukrainian POWs from steel plant stirs concern
Man drowns in Lost Lake in Fresno County
Hanford police officer, K9 hospitalized after exposure to fentanyl
Merced Co. offers free culinary classes for students of all abilities
More TOP STORIES News