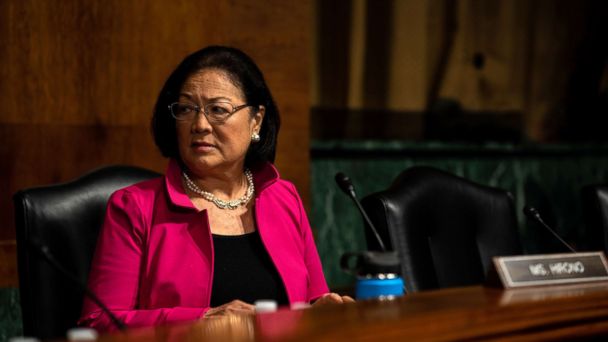 A Democratic member of the Senate Judiciary Committee said Brett Kavanaugh revealed he is not able to be a "nonpartisan" judge with his "bizarre" claim in testimony last week that he is the victim of a Democratic "conspiracy to do him in."

Sen. Mazie Hirono, D-Hawaii, told ABC News Chief Anchor George Stephanopoulos in an exclusive interview on "This Week" Sunday that she was shocked by Kavanaugh's accusation that Democrats are attempting to block his nomination as "revenge on behalf of the Clintons."

"He came out at that hearing, which was shocking to me -- that he would accuse Democrats of a vast conspiracy to do him in and even dragged in Hillary Clinton," Hirono said. "I found that bizarre. But we hardly need somebody on the Supreme Court who has these conspiracy theory notions."

Kavanaugh, who has been a federal appeals court judge since 2006, worked for Ken Starr when he was the independent counsel investigating the Clintons during Bill Clinton's presidency.

Hirono said that at the hearing, Kavanaugh "totally showed himself to be ... the political operative and the partisan operative that he has been."

She added the because of Kavanaugh's alleged partisan bias, if he is confirmed to the Supreme Court, he may need to recuse himself from cases involving Democrats.

"I would think that if I were a Democrat going before him [on the bench], I'd ask him to recuse himself," Hirono said.

Kavanaugh's testimony Thursday followed that of Christine Blasey Ford, who has accused the judge of sexually assaulting her at a party when the two were in high school.

Kavanaugh has strongly and categorically denied any allegations of sexual assault or sexual misconduct.

Republican Sen. Lindsey Graham, a staunch supporter of Kavanaugh's who also appeared on "This Week," responded to criticism of the nominee's temperament during the hearing.

"I'm offended by the fact that anybody would hold it against Brett Kavanaugh to be upset by the way he was treated," Graham said Sunday. "He's accused of being a gang rapist, a bumbling, stumbling drunk, a degenerate person, and he was hit by a truck. And my problem is with the people who did this to him, not how he responded."
Report a correction or typo
Related topics:
abc newsnational
Copyright © 2021 ABC News Internet Ventures.
More Videos
From CNN Newsource affiliates
TOP STORIES