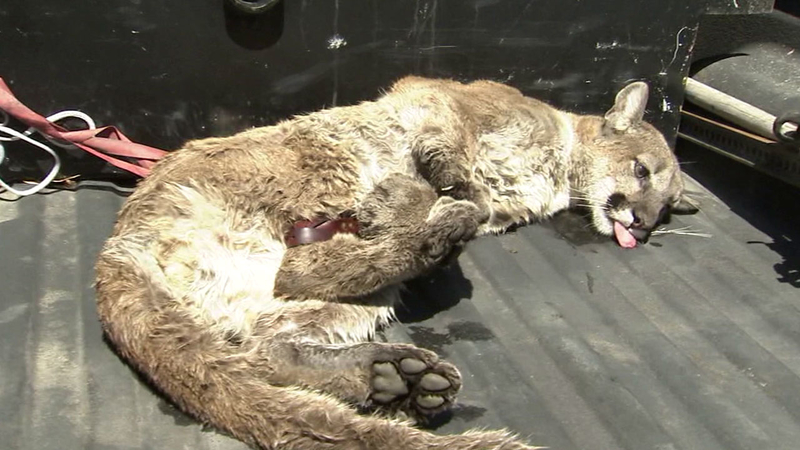 GRANADA HILLS, LOS ANGELES -- State wildlife officials say a mountain lion that wandered onto the campus of John F. Kennedy High School in Granada Hills has been tranquilized and returned to its natural habitat in the Santa Susana Mountains.

Officials tweeted a video of the groggy animal walking away into the Santa Susana Mountains.

Granada Hills lion a little groggy but walking away at 4:15 this afternoon. pic.twitter.com/ZmdtEPY9RK

The high school was placed on lockdown after the animal was spotted on campus Friday morning, the Los Angeles Unified School District said.

State Department of Fish and Wildlife wardens arrived and shot the animal as it ran through the school located at 11254 Gothic Avenue shortly after noon.

The startled mountain lion hopped a wall and ran into the neighborhood, stumbling into a yard near the 16400 block of Donmetz Street.

Vanessa Nino says she was just steps from the big cat and froze when it ran past her and other onlookers.

"We do see the mountain lion jump over the wall of the school and just ran down all the way, which was the craziest thing because everybody was just standing there and you see a mountain lion run, and you just don't know where to go," Nino said.

Authorities tracked the mountain lion down and hit it with a second tranquilizer dart. Wardens kept close watch as it sat down and dozed off in a bed of flowers. They then moved in, hand-delivering yet a third round of drugs to make sure the cat stayed down.

"He was fighting the drugs, kind of rare. I haven't seen a lion fight the drugs that much," Lt. J.C. Healy of the California Department of Fish and Wildlife said. "I darted him again and then we actually used a hand stick. We loaded up a syringe with some little more drugs because we don't want him to overheat, so what I would rather do is play it safer, get him down as fast as he can. We're going to keep him wet, keep his body cool."

State wildlife officials then loaded the tranquilized animal onto a truck.

State wildlife officials say a mountain lion that wandered onto the campus of John F. Kennedy High School in Granada Hills has been tranquilized and will be returned to its habitat.

The mountain lion, which was not tagged or known to wildlife officials, was tagged before being released into the Santa Susana Mountains, according to Andrew Hughan of the California Department of Fish and Wildlife.

The big cat's gender, weight and approximate age were not immediately available, but Hughan said it crossed into the area through the Knollwood golf course.

The high school's mascot happens to be a cougar.