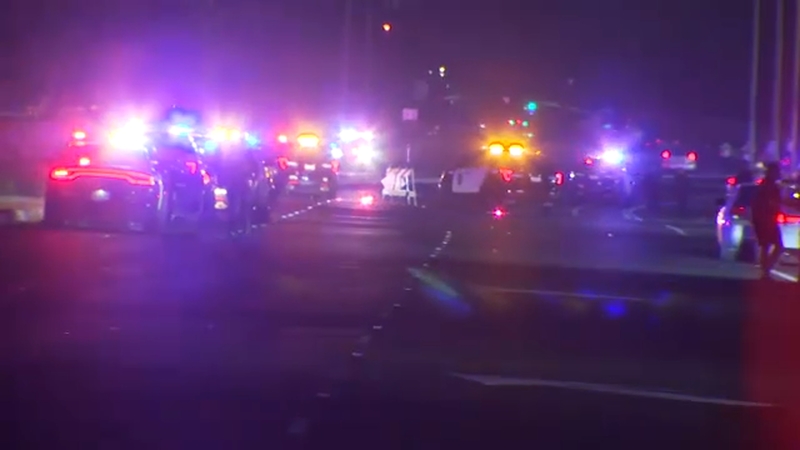 FRESNO, Calif. (KFSN) -- A shooting in the parking lot of a Valley high school football stadium sent some fans running for the gates.

Police say they've arrested a suspect in connection to the shooting that put a teenager in the hospital.

The suspect, 19-year-old Taevion Yancey, is facing charges of attempted homicide and carjacking for entering someone else's vehicle and trying to get them to drive him away.

Police say they have found the firearm he allegedly used.

The shooting happened at Deran Koligian Stadium in Fresno County just after 10 p.m. on Friday.

A game between Central and Bullard High had just ended and fans were walking towards their cars when gunfire rang out in the parking lot.

Several police officers were already in the parking lot.

#UPDATE @FresnoPolice say as people were leaving shots rang out in the parking lot outside the stadium. Officers in the area heard them, gave chase to a possible suspect, a 19yo man, and were able to detain him. @ABC30

They chased down and arrested a man running away from the shooting.

First responders rushed the teen, D'Anthony Fields, to the hospital, where he is recovering from his injuries.

No other victims were hit in the shooting.

"This appears at this time that this was a specifically targeted incident. It appears that there are gang ties, we don't know what those are right now. But officers were on scene - they observed what happened, gave chase to the suspect, and were able to take him into custody," said Fresno police Lt. Sean Biggs.

The vehicle the man who is being detained was in has been secured by police, officers also recovered a firearm. Officials say initial investigation shows this appears to be a gang-related incident, saying the person who was shot was specifically targeted. @ABC30

The stadium was temporarily put on lockdown while police worked to control the crime scene.

After a few minutes, officers opened the gates and fans quickly left the parking lot.

On Saturday morning, the Fresno Unified and Central Unified school districts sent a joint statement, urging students and staff to contact them for support.

Here is the full statement:

The Central and Fresno Unified School Districts take this matter very seriously. We're grateful that no current students, staff, or families of either district were involved, but we know that all who were in attendance are grappling with the aftermath of being exposed to this kind of violence. Mental health support staff will be available at schools on Monday to help students and staff navigate through this difficult situation. Students and families are urged to contact their school districts for any support they may need.
The Central and Fresno Unified School Districts continue to work with the Fresno Police Department as the investigation continues. We would like to thank Fresno Police officers, Fresno firefighters and EMS staff for their life saving actions and speedy response.