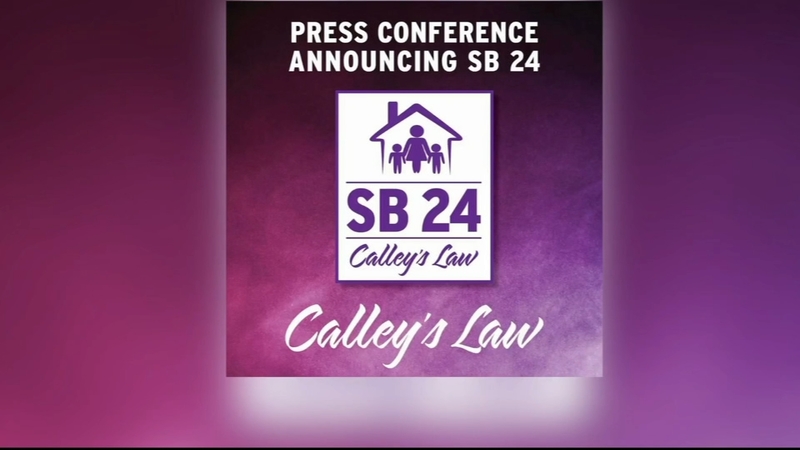 Calley Garay, 32, was shot to death outside of a health clinic in Madera -- a place investigators say her estranged husband was able to track her whereabouts.

"Getting the courage to leave is huge but then to stay gone and continue the battle is a whole other thing," Calley's cousin Sarah Rodriguez said.

She says she wants people to remember Calley for that courage. "We helped her escape in May. I can't even imagine what she went through. Just listening to her story was horrific."

Calley Garay left her husband after what her family says were years of abuse. The mother of three obtained a restraining order against her husband and went into hiding with her children.

Three months later -- Calley would be shot and killed while shielding her boys from gunfire.

Madera Police say the shooter was her estranged husband -- Julio Garay -- who learned her location after she scheduled a medical appointment.

The 50-year-old is awaiting trial -- charged with her murder and endangering their children.

In his last court appearance, Garay pleaded not guilty.

Authored by Senator Anna Caballero, Calley's Law, or SB 24, seeks to add a section in a domestic violence restraining order, where a judge can hide school or medical records that could reveal a child's whereabouts to an abusive parent.

Rodriguez says "This bill will open doors and give other women just a little bit more strength to take the leap to leave."

The Marjaree Mason center works with victims in hopes of preventing these kinds of tragedies.

Executive Nicole Linder says, "Our volume has been a lot higher. The severity of the violence we're seeing is a lot higher."

In addition to providing emergency and transitional shelter for victims of abuse, they assist with the court and restraining order process.

"The more we can make people aware that there are supportive services available, and truly understand the ramifications of what could happen, that's a high priority for us," Linder said.

If you, or someone you know, is the victim of domestic violence, help is available.
The Marjaree Mason Center has a 24-hour crisis hotline (559) 233-HELP (4357) and more resources are available at mmcenter.org
Report a correction or typo
Related topics:
fresnodomestic violence
Copyright © 2021 KFSN-TV. All Rights Reserved.
More Videos
From CNN Newsource affiliates
TOP STORIES