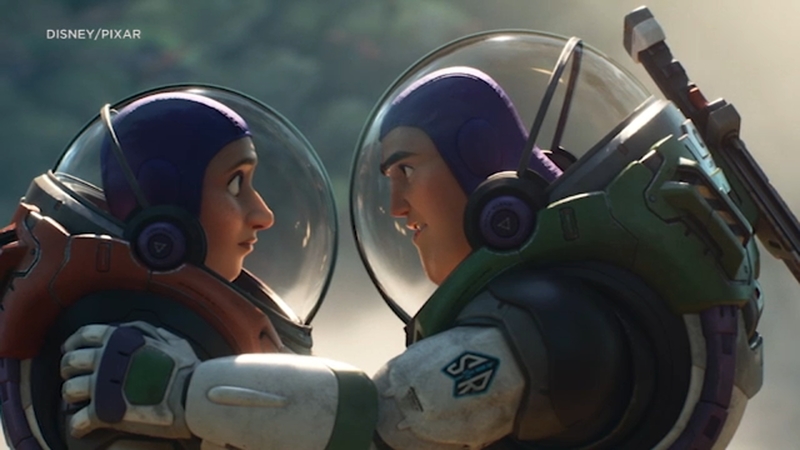 The new movie "Lightyear" tells the story of the heroic Buzz Lightyear. Turns out, before he was ever an action figure featured in the "Toy Story" movies, Buzz was a space ranger. "Lightyear" gives us a look at his life.

For this film, Chris Evans is the voice of Buzz Lightyear, and was thrilled to do it!

"I was just living a childhood fantasy. You know, I've been really lucky in my career to have done a lot of things and work with a lot of wonderful people and been proud of a lot of work I've done but -- this was something really personal to me," said Evans. "I love Pixar movies. I love animated movies."

Evans was honored to follow in the footsteps of Tim Allen, who voiced the Buzz action figure in the "Toy Story" movies.

"I was happy that I was able to respect his performance by stealing from it!" Evans joked.

When Disney-Pixar's "Lightyear" premiere took over Hollywood, it also served as a first time meet-and-greet for several of the stars of the animated adventure.

The film also includes the voices of Uzo Aduba as Buzz's commander and best friend, and Keke Palmer as her granddaughter. Zurg, the evil force behind an army of robots, is voiced by James Brolin. And Taika Waititi is a clumsy space ranger named Mo.

"They're emotional stories. I always go to a Pixar film just to feel something. I know I'm going to probably cry and I'm definitely going to laugh and I'm going to feel fulfilled at the end," said Waititi.

"Lightyear" is also a lesson in what it means to be a team.

"Teamwork, what it means to be a leader; it's not always the same," said Palmer. "Accepting that other people are leaders, allowing, empowering one another to step into their own leadership roles."

"Absolutely. And also that I think to be gentle with yourself, not be so hard on yourself either, but that a setback doesn't mean it's not a set-up for victory," said Aduba.

Brolin is proud to show this film to his family, including son Josh's kids.

"Lightyear" is rated PG and is in theaters June 17.