'Everything was burning:' Madera couple rescues 5 crew members of the California boat fire 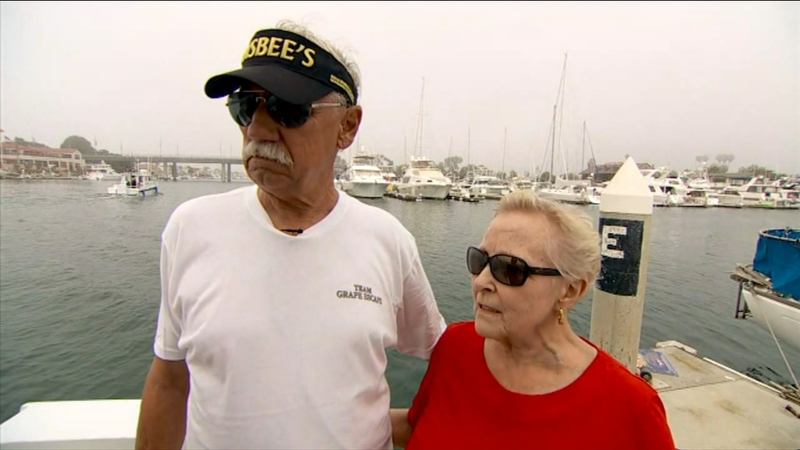 'Everything was burning:' Madera couple rescues 5 crew members of the California boat fire

FRESNO, Calif. (KFSN) -- Bob and Shirley Hansen, a Madera couple, were just yards away when a diving charter went up in flames near Santa Cruz Island, killing many of the passengers on board.

"It was horrific I'd never seen such a thing," said Bob Hansen.

Anchored less than 400 yards away, the Hansens woke up to the sounds of panicked crew members that had jumped overboard, banging on their hull.

"There wasn't a part that wasn't burning everything was burning on it," Bob said.

Little did they know their boat, the Grape Escape, would prove to be just that for the five known survivors.

"One of the crew members had a broken leg and was in a considerable amount of pain. and another had a twisted ankle but the captain was okay and two other crew members," he said.

Hansen says the crew members used a dingy and swam hundreds of yards to get to their boat.

A vessel based in Madera called the 'Grape Escape' came to the rescue of people aboard a boat that erupted in flames near Santa Cruz Island early Monday morning.

When they looked over, they got sight of the diving charter consumed by the blaze.

"It was so overwhelming to come out and see these men there, and look over and see the extent of the fire," Shirley said. "The flames were shooting up into the sky."

The Coast Guard says 39 people were aboard the diving charter when the tragic fire broke out.

"The majority of the people were passengers in the bottom deck of the ship. They were likely asleep. You couldn't ask for a worse situation," said Santa Barbara County Sheriff Bill Brown.

The chilling mayday call was made as the boat was devoured by flames.

So far, 25 bodies have been recovered.

While the Hansens were able to save some of the crew members, the search for at least nine other missing passengers remains grim.

Bob Hansen says the tragedy hit too close to home, his daughter and son-in-law have gone on the Conception for dive trips.

In a press conference Monday, sheriffs officials say the Conception was on a three-day trip along the north channel islands.

"I think we all should be prepared to move into the worst outcome," said Capt. Monica Rochester with U.S. Coast Guard.

The cause of the fire is still under investigation.
Report a correction or typo
Related topics:
coast guardrescuefiresearch and rescueboat accident
Copyright © 2021 KFSN-TV. All Rights Reserved.
More Videos
From CNN Newsource affiliates
TOP STORIES