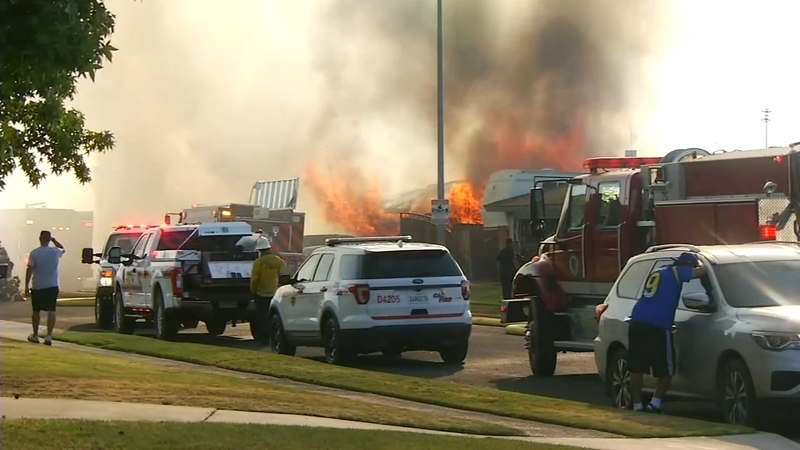 Both were complete losses and two other houses were damaged.

The fire ignited behind the homes in the Fresno riverbed, which is mostly dried-up brush.

Officials say the area is often occupied by homeless encampments. Wind carried smoldering embers to the neighborhood above.

"With the winds pushing out, we probably had 15-20 mph winds when the fire started," says Anthony Garcia with Madera Fire.

Swift action by firefighters -- 12 engines responded, including ones from neighboring regions including Fresno Fire, Merced County Fire and CAL FIRE.

The flames were so intense, homeowners stepped in to help.

"This one was fast-moving," says Mike Varlas. "Our neighbors, one was on our roof hosing the house down. The other was hosing the fences."

Varlas has lived in his house since the 80s and says the fire danger comes with their location.

"My wife is a firm believer in defensible spaces and I support that too, so she's out here every year with the hoe and she just takes all the brush down," he said.

The immediate neighborhood had to be evacuated and 23 homes were without power.

As many as eight people are displaced from their homes.

One firefighter suffered heat exhaustion and had to be treated. But no residents were injured.

Crews say what helped them take action quickly was the cooperation of neighbors.

"A lot of these people were ready to leave," Garcia said. "When we do ask for evacuation orders, we need everyone out of there as soon as possible, so grab whatever you can quickly, get your family out of there safely."
Report a correction or typo
Related topics:
maderawildfire
Copyright © 2022 KFSN-TV. All Rights Reserved.
TOP STORIES
Truck driver stabbed to death after giving man ride in Avenal: FCSO
Valley experts urge water safety as hot weather returns
Biden signs landmark gun measure, says 'lives will be saved'
Bald eagle snatches Yorkie off porch: VIDEO
Car theft suspect arrested after chase with Fresno police
Explosion at popular Fresno food truck injures 2, including minor
Supreme Court overturns Roe in landmark case on abortion rights
Show More
Visalia man sentenced to 42 years in prison for killing his girlfriend
'Night of Rage' concerns at Valley churches, Planned Parenthood
Pride Night at Fresno zoo draws families in rainbow attire
Companies willing to cover travel costs for those getting an abortion
New Tulare police chief announced
More TOP STORIES News