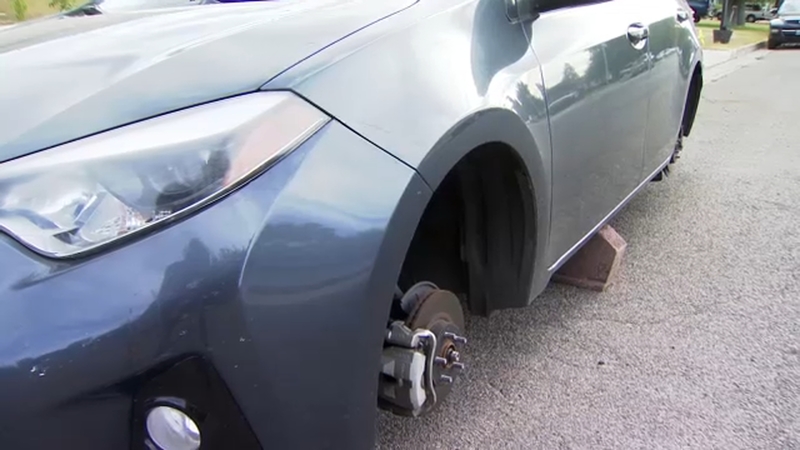 FRESNO, Calif. (KFSN) -- Police say at least six people in Madera woke up Wednesday morning to see the tires missing from their cars. Investigators with Madera Police say on a single day, they received 6 reports of tires stolen overnight within city limits.

"The proximity of these is obviously spread across the city there is not a real pattern," said Detective Blake Short.

What the thefts do have in common is the type of vehicles targeted.

"It seems that they are after more of the premium style wheels for Toyota and Honda vehicles," said Short. "The wheels that you can purchase on your car from the dealership. Not so much that you go to a tire and wheel shop and have added to a car."

On Roberts Ave, one woman says she was shocked to find her Toyota up on a cinder block Wednesday morning.

"I got a text this morning saying, 'Your tires are missing.' I came outside and looked on the street-side. They were missing," she said.

Only two tires were stolen. But to maintain alignment, all four will need to be replaced, which is an estimated $1,500 expense.

Less than two miles away at Dellavalle and Cleveland Avenues, the owner of another Toyota sedan suspects his two tires were stolen around the same time frame.

Madera Police say it's critical to report thefts like these because one crime could be part of a widespread trend.

"If we get numerous calls, we can track those. Maybe this house does have surveillance, where this house didn't," said Short.

At Big Boys Tire and Auto Repair in Madera, they are selling a solution. Wheel lock kits that take moments to install but could save you thousands. The kits can also be purchased online. One unique lug nut goes on each wheel that requires a special key, included in the kit, to remove.
Report a correction or typo
Related topics:
maderaauto theft
Copyright © 2022 KFSN-TV. All Rights Reserved.
TOP STORIES
Visalia man sentenced to 42 years in prison for killing his girlfriend
Explosion at popular Fresno food truck injures 2, including minor
Supreme Court overturns Roe in landmark case on abortion rights
'Night of Rage' concerns at Valley churches, Planned Parenthood
Pride Night at Fresno zoo draws families in rainbow attire
Brian Laundrie confession letter released: 'I ended her life'
Valley experts urge water safety as hot weather returns
Show More
Health officials warn about heart health during hot weather
Ashlan Ave. partially shut down after fiery crash at Ashlan and Hwy 41
What does Supreme Court decision on abortion rights mean for CA?
Central CA SPCA offering spay and neuter clinic for dogs and cats
Biden vows to 'do all in my power' to protect abortion access
More TOP STORIES News