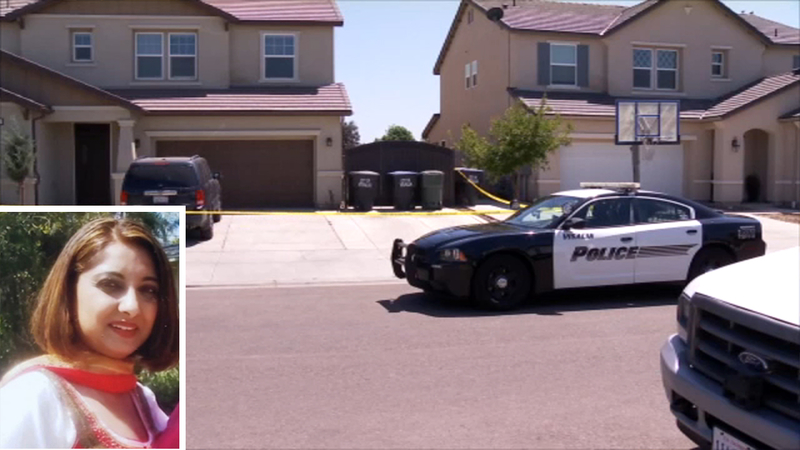 VISALIA, Calif. (KFSN) -- Mandy Basra was stabbed to death inside a Visalia home eight days ago.

Her brother-in-law, 22-year-old Swarndeep Basra, was arrested and charged with her murder.

Visalia police say that after hearing an argument, the two boys went downstairs to see their uncle kick their mother and then stab her multiple times with knives.

According to the document, first responders found Mandy with a knife still in her chest.

She was rushed to the hospital but died less than an hour later.

Police say her brother-in-law confessed to killing her.

They both worked in the financial industry and were involved with the Tulare Kings Hispanic Chamber of Commerce.

Their families were also close.

Mandy would dote on Kaur's daughter.

"She loved her dearly because she said she always wanted a daughter," Kaur said.

Kaur knew Mandy needed to be honored and remembered in a public setting because of her many contributions to the Visalia community.

So she planned a candlelight vigil at the Sikh Temple, which will include speeches and books to sign.

Kaur hopes Mandy will be watching, as she reflects fondly on the friend she lost.

She's been thinking about a message she received from Mandy about a month ago.

Swarndeep Basra is expected to be back in court in July.

He's being held in the Tulare County Jail.

If you are the victim of domestic abuse, or you know someone who is, there is help available 24/7. In Fresno County, call the Marjaree Mason Center at (559) 233-4357. In all other locations, call the National Domestic Violence Hotline at (800) 799-7233.
Report a correction or typo
Related topics:
visaliamurdervisaliastabbing
Copyright © 2021 KFSN-TV. All Rights Reserved.
MURDER
How millionaire, ex-NFL player, mom become deadly love triangle
Home that inspired 'The Conjuring' movie for sale for $1.2M
Scott Peterson to be re-sentenced to life this fall, judge says
Suspects to stand trial in 1996 Kristin Smart disappearance
TOP STORIES
Crackdown on Fresno's gang violence is showing results, police say
Fresno State Bulldogs rise to #18 rank in AP Top 25
KNP Complex Fire grows by over 3,000 acres in last 24 hours
OH haunted house actor stabs boy, 11, while trying to scare him
Madera police say 2 killed in separate homicides overnight
15-year-old boy hospitalized after shooting in central Fresno
New Dutch Bros location opens in Porterville
Show More
Officials investigate after Amtrak crash involving train from Chicago
Hundreds come together for Old Timers' Parade in Madera
Protesters call on leaders to stop evictions in the Valley
Air purifiers could protect you from Valley's pollution, doctor says
Fresno County residents can now get the flu shot at drive-thru clinics
More TOP STORIES News