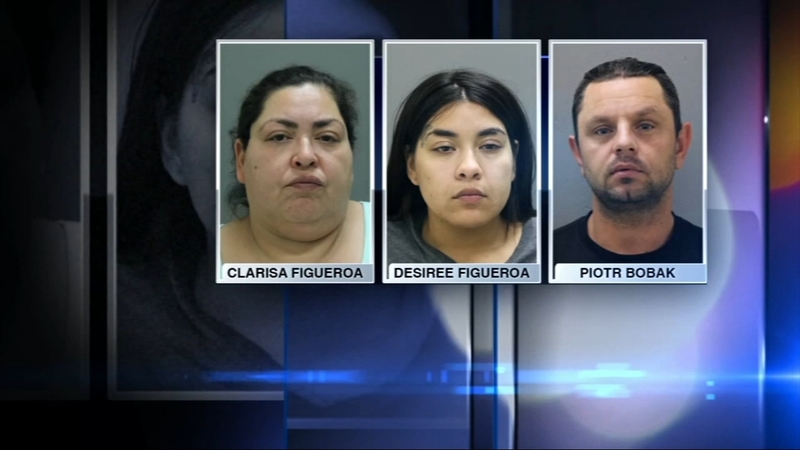 CHICAGO, Illinois -- A mother and daughter have been charged in the strangling death of a young pregnant woman in Chicago and for removing her baby from her womb.

Clarisa Figueroa, 46, and her daughter Desiree Figueroa, 24, face murder charges in the death of Marlen Ochoa-Lopez.

Piotr Bobak, 40, the boyfriend of Clarisa, was charged with concealing a homicidal death, police said.

Three people, including a mother and daughter, have been charged in the death of a young pregnant woman on Chicago's Southwest Side.

The Cook County Medical Examiner's Office said remains found at a home in Chicago's Scottsdale neighborhood were identified as those of Ochoa-Lopez. She was reported missing three weeks ago from Pilsen and was nine months pregnant when she disappeared.

Police were seen investigating outside a home on Chicago's Southwest Side where a missing pregnant teen's remains were found.

Officials said her cause of death was ligature strangulation.

The loss of 19-year-old Marlen Ochoa-Lopez has left her family in shock as her baby continues to fight for his life.

Police said a break in the case came last week when they were tipped off to a Facebook page that indicated the pregnant teen had been in contact with Clarisa to pick up some baby clothes.

Articles of Ochoa-Lopez's clothing and blood were found inside the home, police said. A coaxial cable, which police believe was used to strangle Ochoa-Lopez, was also found on the property.

The fire department actually went to the home on April 23, the day Ochoa-Lopez disappeared, after Clarisa claimed to have given birth at home.

"The caller gave birth 10 minutes ago," a 911 dispatcher tells the Chicago Fire Department. "46 years of age. The baby isn't breathing. The baby is pale and blue. They are doing CPR."

That baby is now fighting for his life at Christ Hospital in Oak Lawn.

"The detectives went to see the baby, get the DNA testing, and confirm that that is Marlen's baby," Garcia said.

A person, who didn't want to be identified, said that the woman from the home, one of three people being questioned, used to babysit her infant, until she began acting strangely.

"She told me how she was getting really attached to the baby, how she couldn't wait to be a mom again," the woman said.

Clarisa lost an adult son several years ago, according to police, which greatly affected her. Police did not provide a motive, other than saying that the trio planned to raise the baby as their own.

Ochoa-Lopez's loved ones, seen entering the medical examiner's office Thursday morning to see the young woman's body, have been left heartbroken and horrified.

About a half a block away from the house where Ochoa-Lopez's remains were found, a memorial of flowers, candles and stuffed animals has been growing.

"Why did these people, why did these bad people do this? She did nothing to them," said Yovani Lopez, her husband. "She was a good person."

"It's so hurtful, so hurtful to see the person, your wife, who you lived with for four years and now you see her with her eyes closed," he said.

"It just seems surreal, like you see this stuff on movies," said family spokesperson Cecilia Garcia.

Ochoa-Lopez's mother said losing a child is one of the worst pains one can go through.

The family said the baby has been named Yovani Yadiel Ochoa-Lopez. Ochoa-Lopez also leaves behind a 3-year-old child.

About a half a block away from the house where Ochoa-Lopez's remains were found, a memorial of flowers, candles and stuffed animals has been growing.

Cristy Hall came by to drop off a bear and paper flowers that her son had made.

"I can't fathom what could be in your mind to hurt such an innocent young person that's trying to do good for her family," she said. "It makes me, as a mother, want to just bring my kids closer. Like it makes you not want to let your children out of your sight."

Ochoa-Lopez's aunt said they are hoping to set up a GoFundMe campaign to help with expenses soon, but warned that the campaigns currently listed on GoFundMe for the family are not by or associated with them, and warned the public not to donate.