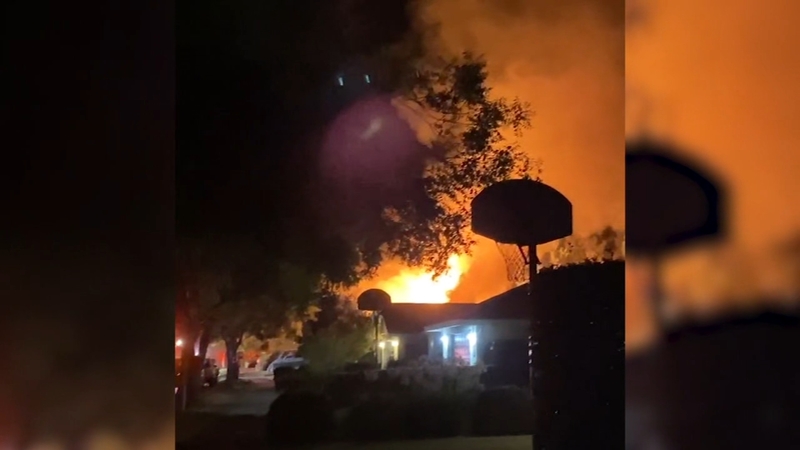 A North Valley homeowner's celebrations were cut short on July 4th when their roof was destroyed within minutes after illegal fireworks ignited it.

Charred shingles were still visible through trees at the home near Joerg Avenue and Mirror Lake Drive in Merced Tuesday.

Illegal fireworks on Sunday set the shake roof on fire.

Because of the type of roof, the flames quickly spread to the attic and started threatening homes next door.

Gina Moss, who was next door visiting her parents for the holiday, said she went inside momentarily and returned to chaos.

"I quickly said, 'What's going on?' and they said 'The neighbor's roof is on fire.'" Moss said.

Moss' parents home was threatened by the flames, so her dad hosed down the side of the house as they waited for fire engines.

The heat from the fire bubbled the paint and broke a window.

"Every time I went back, the heat was so incredibly hot," Moss said.

The homeowner whose house was destroyed the the flames didn't want to go on camera but told Action News companies wouldn't insure the home because of the style of roof.

He said he and his wife are ok and will be staying with a family member nearby.

"We couldn't move without running into illegal firework activity," said Chief Parker as he described areas of Merced.

He said 71 citations were handed out for illegal fireworks, 48 thanks to reports made by residents in the city's mobile app.

The fire chief showed a map of the citations issued saying it was all across the city.

The chief said homeowners, not renters, will be fined in hopes that more action will be taken to prevent it in the future.

"Every year, Merced has a pretty substantial issue dealing with illegal fireworks throughout the community. It's not one area, it's all around," said Chief Parker.

Chief Park said the low cost of illegal fireworks may be the reason they're so popular.

The illegal fireworks will be taken to the city of Davis and destroyed.