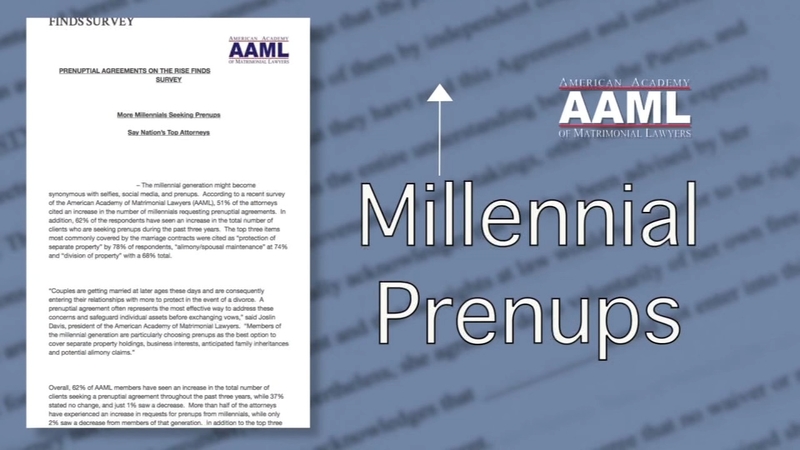 Before any engagement, Erin asked her fiancé about getting a prenup.

"Marriage is about love and it's about romance. But, I would never get into another contractual obligation without protecting myself. And marriage is a contract," said Lowry.

She owns a business and her fiancé has some student debt they plan to pay off after the wedding.

Lowry says an agreement simply spells out how things work.

"The way my lawyer put it, which I really love, is that everyone has a prenup. It's the law of your state. But by actually going through the process of signing one and creating one yourself, you're taking the power back," said Lowry.

A survey of the American Academy of Matrimonial Lawyers finds more than 50-percent of participating attorneys have seen an increase in millennial prenups.

The academy's president says millennials are different than past generations.

"They consider it more of a business deal than anything else," said Academy of Matrimony Lawyers Madeline Marzano-Lesnevich.

Legal experts say prenups used to be primarily suggested by men with a lot of assets or parents trying to protect family money.

But now, male and female millennials want to protect what they have accrued before marriage. And, while spelling out what happens if a relationship breaks down is tops, prenups cover so much more.

"They will make specific arrangements in their prenuptial agreement for how household expenses will be paid," said Marzano-Lesnevich.

Erin says at first, her fiancé thought of the agreement as a sort of "divorce contract" but he eventually came around.

Now they both see it as more as marriage insurance.

"There's not going to be any blindsiding once you're actually married, and anything that could cause a lot of tension, especially in that first year of marriage, has really already been talked through before you even say 'I Do'," said Lowry.
Report a correction or typo
Copyright © 2021 KFSN-TV. All Rights Reserved.
TOP STORIES
Police locate vehicle suspected in deadly Fresno hit-and-run crash
Newsom assaulted by 'aggressive' man on CA street
CA launches electronic vaccine verification
Lightning flashes across sky in parts of Central CA
Robocall-like tech used to get to front of EDD line
New online vaccine record not working? Here's how to fix it
CA power grid declares Flex Alert for tonight
Show More
37-year-old shot multiple times in southeast Fresno
3 killed in fiery car crash on I-5 in Fresno County
CA will stop giving unemployment benefits to people not looking for jobs
Local event organizers working to keep residents cool amid heat wave
Firefighters battling multiple wildland fires in Tulare Co.
More TOP STORIES News