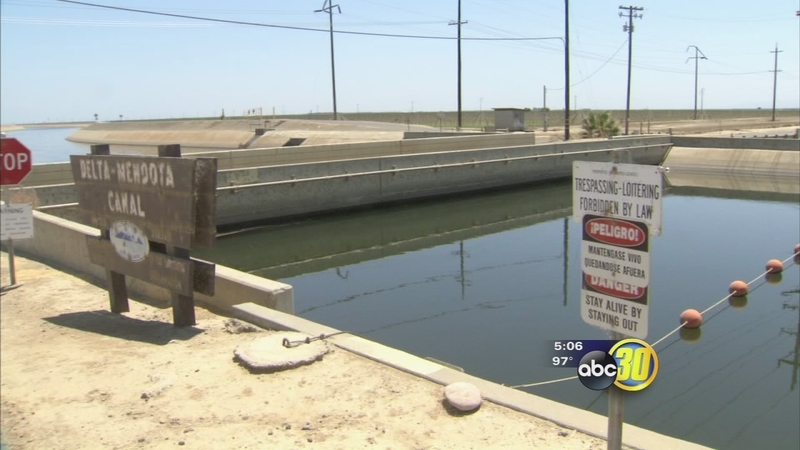 FRESNO, Calif. (KFSN) -- The drought and the cutoff of water from state and federal sources has forced Valley farmers to pump record amounts of well water on their crops. This has led to the ground above the depleted water aquifer to collapse or subside, by up to two feet a year in some parts of the Central Valley.

The bridge at Russell Avenue near Firebaugh in Western Fresno County is one of the most obvious examples of subsidence. The bridge is supposed to go over this canal, owned by the Central California Irrigation District, but it's not. District Directors Chris White points out, it's sinking along with the surrounding farmland.

White explained, "Now today because of localized subsidence in this area the bridge is also down in the water. The land around here is sinking."

When this bridge was built you could actually float under it with a boat. But now, because the land is sinking the water is actually higher than the bridge.

The price tag for just replacing this one small bridge, is estimated to be about $2.5 million. Much of the burden for fixing it will fall on the taxpayers.

Son says there are a lot of bridges in the county that need repairs, from subsidence and other issues.

"We could have a bridge that could be replaced for a million we have some that could cost 25 million," explained Son.

Just a mile from this sinking bridge another over the Delta Mendota Canal is close to being flooded, and will have to be raised. In addition to bridges, White notes canals are being impacted.

White added, "We've had to raise the canal banks up in order to pass water through here we just completed that last year and the total price tag on that was 4 and a half million dollars. "

Scientists from the U.S. Geological Survey believe subsidence is affecting a huge area, impacting irrigation canals, highways, and railroad tracks. They project the cost to deal with subsidence will reach into the billions of dollars in the Central Valley alone.